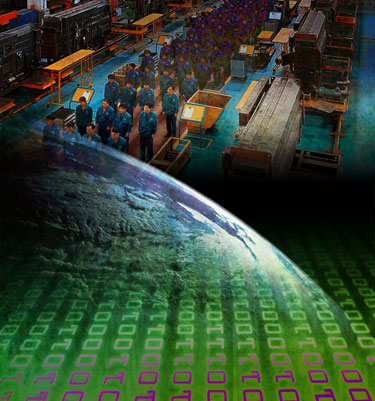 Britain is a surreal place to be living right now.

The infamous Ministry of Defense trend report for 2007-35 projects the British middle classes ‘becoming revolutionary, taking on the role of Marx’s proletariat.’

I should be seeing the start of the ferment.

Our living standards are being attacked: people are losing their jobs, there is fast inflation, taxes are increasing and every year hordes of young people leave university to few job opportunities.

And yet there is virtually no anger at all. The conversation between people is as trivial and inane as ever.

Most social life in my town of 25,000 people is found in cafes and pubs. Primarily young mothers and housewives inhabit the cafes, while the pubs, charging £3 a pint, are now too expensive for most people to visit regularly.

Everyone else is locked indoors.

The streets are surprisingly subdued. I often take long walks lasting many hours and encounter few other souls. It is eerily quiet.

Even on a Friday night in Coventry, a City of 300,000 people nearby, the high street is surprisingly lifeless. The young are not out mixing and causing trouble as they should be.

When experiencing this shocking lack of activity and desire for life, you may wonder: Where is everyone?

They are at home gorging on limitless free TV shows, movies, songs and social networking. Their leisure time is spent engrossed in a fantastical ‘second life’.

Television is a tremendous tool of distraction. Internet is even more dangerous. It is a black hole of amusement that swallows people’s lives and destroys whole cultures.

It is why few will panic as Rome burns.

AMUSEMENT- A LURE FOR TYRANNY

Distraction aside, the ‘second life’ experienced online is designed for a more sinister purpose: to lure us into an electronic control grid. The elite plan a borderless world where a homogeneous slave populace serve their interests.

Jacques Attali, an Illuminati banker go-fer, wrote a book called ‘Millennium: Winners and Losers in the Coming World Order’ in 1990. He said amusement machines are used to re-program us:

‘These objects–whose embryonic forms, like the Sony Walkman or the laptop computer, are ubiquitous today–will help create a different human being.’

The new human will have no family or cultural ties. He will be nomadic, tracked and controlled by a ‘memory card’ (i.e. ID card):

‘The memory card will become the principal artificial limb of a person, at once an identity card, a checkbook, a telephone, and a fax machine–in sum, nomadic man’s passport. It will be a kind of artificial self.  To use it will only require plugging it into the global electronic networks of information and commerce, the oases of the new nomads.’

As nomadic worker bees, we will scramble to live in the super-cities of the future:

‘Middle-level nomads will stay in places that are impersonal, like the hotels that today ring airports throughout the world. Only the most fortunate rich nomads will have the means to become property owners in the large cities, which will be the magnetic poles for their brethren from all areas and regions of the globe.’

We will co-exist in two realities: in the real world as surfs and in our cyber-fantasy:

‘Cities will be fortified, dangerous places, the tangled heart of electronic networks, a cabled field of dreams.’

The internet is designed to lure us into totalitarianism. The acceptance of a ‘second life’ online is a rejection of reality, making us clay in the hands of our rulers.

Those hooked on the internet, most especially the young need to start rejecting it and fill our parks, homes, pubs with real social activity.

We must start shaking off our ‘second life’.

If we don’t, we may become the ‘losers’ Attali describes inhabiting the NWO:

‘In the coming world order, there will be winners and there will be losers. The losers will outnumber the winners by an unimaginable factor. They will yearn for the chance to live decently, and they are likely to be denied that chance. They will encounter rampant prejudice and fear. They will find themselves penned in, asphyxiated by pollution, neglected through indifference. The horrors of the twentieth century will fade by comparison.’