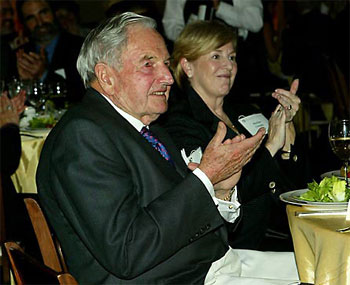 “They make a desolation and call it peace.” -Tacitus

Was Alan Greenspan really as dumb as he looks in creating the late housing bubble that threatens to bring the entire Western debt-based economy crashing down?

Was something as easy to foresee as this really the trigger for a meltdown that could destroy the world’s financial system? Or was it done, perhaps, “accidentally on purpose”?

Let’s turn to the U.S. personage that conspiracy theorists most often mention as being at the epicenter of whatever elite plan is reputed to exist. This would be David Rockefeller, the 92-year-old multibillionaire godfather of the world’s financial elite.

The lengthy Wikipedia article on Rockefeller provides the following version of a celebrated statement he allegedly made in an opening speech at the Bilderberg conference in Baden-Baden, Germany, in June 1991:

“We are grateful to the Washington Post, the New York Times, Time magazine, and other great publications whose directors have attended our meetings and respected their promises of discretion for almost forty years. It would have been impossible for us to develop our plan for the world if we had been subject to the bright lights of publicity during these years. But the world is now more sophisticated and prepared to march towards a world government which will never again know war, but only peace and prosperity for the whole of humanity. The supranational sovereignty of an intellectual elite and world bankers is surely preferable to the national auto-determination practiced in the past centuries.”

This speech was made 17 years ago. It came at the beginning in the U.S. of the Bill Clinton administration. Rockefeller speaks of an “us.” This “us,” he says, has been having meetings for almost 40 years. If you add the 17 years since he gave the speech it was 57 years ago—two full generations.

Not only has “us” developed a “plan for the world,” but the attempt to “develop” the plan has evidently been successful, at least in Rockefeller’s mind. The ultimate goal of “us” is to create “the supranational sovereignty of an intellectual elite and world bankers.” This will lead, he says, toward a “world government which will never again know war.”

Just as an intellectual exercise, let’s assume that David Rockefeller is as important and powerful a person as he seems to think he is. Let’s give the man some credit and assume that he and “us” have in fact succeeded to a degree. This would mean that the major decisions and events since Rockefeller gave the speech in 1991 have probably also been part of the plan or that they have at least represented its features and intent.

The implementation of the North American Free Trade Agreement by the Bill Clinton and George W. Bush administrations has led to the elimination of millions of U.S. manufacturing jobs as well as the destruction of U.S. family farming in favor of global agribusiness.

Similar free trade agreements, including those under the auspices of the World Trade Organization, have led to export of millions of additional manufacturing jobs to China and elsewhere.

Average family income in the U.S. has steadily eroded while the share of the nation’s wealth held by the richest income brackets has soared. Some Wall Street hedge fund managers are making $1 billion a year while the number of homeless, including war veterans, pushes a million.

The housing bubble has led to a huge inflation of real estate prices in the U.S. Millions of homes are falling into the hands of the bankers through foreclosure. The cost of land and rentals has further decimated family agriculture as well as small business. Rising property taxes based on inflated land assessments have forced millions of lower-and middle-income people and elderly out of their homes.

The fact that bankers now control national monetary systems in their entirety, under laws where money is introduced only through lending at interest, has resulted in a massive debt pyramid that is teetering on collapse. This “monetarist” system was pioneered by Rockefeller-family funded economists at the University of Chicago. The rub is that when the pyramid comes down and everyone goes bankrupt the banks which have been creating money “out of thin air” will then be able to seize valuable assets for pennies on the dollar, as J.P. Morgan Chase is preparing to do with the businesses owned by Carlyle Capital. Meaningful regulation of the financial industry has been abandoned by government, and any politician that stands in the way, such as Eliot Spitzer, is destroyed.

The total tax burden on Americans from federal, state, and local governments now exceeds forty percent of income and is rising. Today, with a recession starting, the Democratic-controlled Congress, while supporting the minuscule “stimulus” rebate, is hypocritically raising taxes further, even for middle-income earners. Back taxes, along with student loans, can no longer be eliminated by bankruptcy protection.

Gasoline prices are soaring even as companies like Exxon-Mobil are recording record profits. Other commodity prices are going up steadily, including food prices, with some countries starting to experience near-famine conditions. 40 million people in America are officially classified as “food insecure.”

Corporate control of water and mineral resources has removed much of what is available from the public commons, and the deregulation of energy production has led to huge increases in the costs of electricity in many areas.

The destruction of family farming in the U.S. by NAFTA (along with family farming in Mexico and Canada) has been mirrored by policies toward other nations on the part of the International Monetary Fund and World Bank. Around the world, due to pressure from the “Washington consensus,” local food self-sufficiency has been replaced by raising of crops primarily for export. Migration off the land has fed the population of huge slums around the cities of underdeveloped countries.

Since the 1980s the U.S. has been fighting wars throughout the world either directly or by proxy. The former Yugoslavia was dismembered by NATO. Under cover of 9/11 and by utilizing off-the-shelf plans, the U.S. is now engaged in the military conquest and permanent military occupation of the Middle East. A worldwide encirclement of Russia and China by U.S. and NATO forces is underway, and a new push to militarize space has begun. The Western powers are clearly preparing for at least the possibility of another world war.

The expansion of the U.S. military empire abroad is mirrored by the creation of a totalitarian system of surveillance at home, whereby the activities of private citizens are spied upon and tracked by technology and systems which have been put into place under the heading of the “War on Terror.” Human microchip implants for tracking purposes are starting to be used. The military-industrial complex has become the nation’s largest and most successful industry with tens of thousands of planners engaged in devising new and better ways, both overt and covert, to destroy both foreign and domestic “enemies.”

Meanwhile, the U.S. has the largest prison population of any country on earth. Plus everyday life for millions of people is a crushing burden of government, insurance, and financial fees, charges, and paperwork. And the simplest business transactions are burdened by rake-offs for legions of accountants, lawyers, bureaucrats, brokers, speculators, and middlemen.

Finally, the deteriorating conditions of everyday life have given rise to an extraordinary level of stress-related disease, as well as epidemic alcohol and drug addiction. Governments themselves around the world engage in drug trafficking. Instead of working to lower stress levels, public policy is skewed in favor of an enormous prescription drug industry that grows rich off the declining level of health through treatment of symptoms rather than causes. Many of these heavily-advertised medications themselves have devastating side-effects.

This list should at least give us enough to go on in order to ask a hard question. Assuming again that all these things are parts of the elitist plan which Mr. Rockefeller boasts to have been developing, isn’t it a little strange that the means which have been selected to achieve “peace and prosperity for the whole of humanity” involve so much violence, deception, oppression, exploitation, graft, and theft?

In fact it looks to me as though “our plan for the world” is one that is based on genocide, world war, police control of populations, and seizure of the world’s resources by the financial elite and their puppet politicians and military forces.

In particular, could there be a better way to accomplish all this than what appears to be a concentrated plan to remove from people everywhere in the world the ability to raise their own food? After all, genocide by starvation may be slow, but it is very effective. Especially when it can be blamed on “market forces.”

And can it be that the “us” which is doing all these things, including the great David Rockefeller himself, are just criminals who have somehow taken over the seats of power? If so, they are criminals who have done everything they can to watch their backs and cover their tracks, including a chokehold over the educational system and the monopolistic mainstream media.

One thing is certain: The voters of America have never knowingly agreed to any of this.