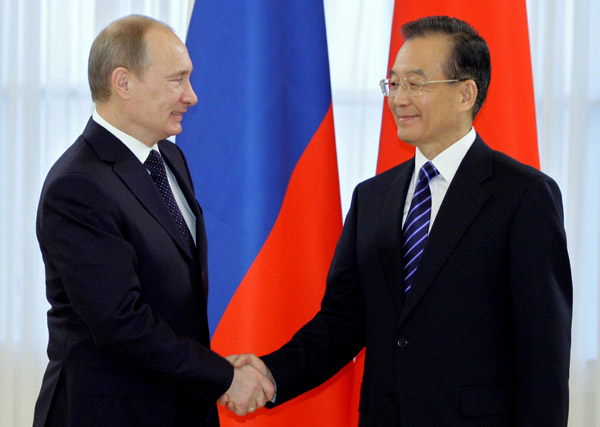 China and Russia have decided to renounce the US dollar and resort to using their own currencies for bilateral trade, Premier Wen Jiabao and his Russian counterpart Vladimir Putin announced late on Tuesday in St. Petersburg.

Chinese experts said the move reflected closer relations between Beijing and Moscow and is not aimed at challenging the dollar, but to protect their domestic economies.

“About trade settlement, we have decided to use our own currencies,” Putin said at a joint news conference with Wen in St. Petersburg.

The two countries were accustomed to using other currencies, especially the dollar, for bilateral trade. Since the financial crisis, however, high-ranking officials on both sides began to explore other possibilities.

The yuan has now started trading against the Russian rouble in the Chinese interbank market, while the renminbi will soon be allowed to trade against the rouble in Russia, Putin said.

“That has forged an important step in bilateral trade and it is a result of the consolidated financial systems of world countries,” he said.

Putin made his remarks after a meeting with Wen. They also officiated at a signing ceremony for 12 documents, including energy cooperation.

The documents covered cooperation on aviation, railroad construction, customs, protecting intellectual property, culture and a joint communiqu. Details of the documents have yet to be released.

Putin said one of the pacts between the two countries is about the purchase of two nuclear reactors from Russia by China’s Tianwan nuclear power plant, the most advanced nuclear power complex in China.

Putin has called for boosting sales of natural resources – Russia’s main export – to China, but price has proven to be a sticking point.

Russian Deputy Prime Minister Igor Sechin, who holds sway over Russia’s energy sector, said following a meeting with Chinese representatives that Moscow and Beijing are unlikely to agree on the price of Russian gas supplies to China before the middle of next year.

Russia is looking for China to pay prices similar to those Russian gas giant Gazprom charges its European customers, but Beijing wants a discount. The two sides were about $100 per 1,000 cubic meters apart, according to Chinese officials last week.

Wen said at the press conference that the partnership between Beijing and Moscow has “reached an unprecedented level” and pledged the two countries will “never become each other’s enemy”.

Over the past year, “our strategic cooperative partnership endured strenuous tests and reached an unprecedented level,” Wen said, adding the two nations are now more confident and determined to defend their mutual interests.

“China will firmly follow the path of peaceful development and support the renaissance of Russia as a great power,” he said.

“The modernization of China will not affect other countries’ interests, while a solid and strong Sino-Russian relationship is in line with the fundamental interests of both countries.”

Wen said Beijing is willing to boost cooperation with Moscow in Northeast Asia, Central Asia and the Asia-Pacific region, as well as in major international organizations and on mechanisms in pursuit of a “fair and reasonable new order” in international politics and the economy.

Sun Zhuangzhi, a senior researcher in Central Asian studies at the Chinese Academy of Social Sciences, said the new mode of trade settlement between China and Russia follows a global trend after the financial crisis exposed the faults of a dollar-dominated world financial system.

Pang Zhongying, who specializes in international politics at Renmin University of China, said the proposal is not challenging the dollar, but aimed at avoiding the risks the dollar represents.

Wen arrived in the northern Russian city on Monday evening for a regular meeting between Chinese and Russian heads of government.

He left St. Petersburg for Moscow late on Tuesday and is set to meet with Russian President Dmitry Medvedev on Wednesday.