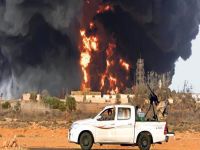 The creation of a no-fly zone in Libya – where rebels are trying to overthrow the government of Colonel Muammar Gaddafi – has created a “scenario” in which the three models of combat aircraft contesting the sale for the Brazilian Air Force (FAB) can view their air combat and military capabilities.

France, USA and Sweden respectively makers of the Rafale, F18 and Gripen, throw these fighters on missions of war under the African desert sky, targeting Libya, in anticipation of a performance capable of seducing the Brazilian government, willing to renew the arsenal of the FAB.

During the administration of former President Luiz Inacio Lula da Silva, Brazil decided to buy 36 Rafale fighter jets, at the total cost of $10 Billion. With the inauguration of Rousseff in the Presidency, the French Rafale was discarded and the United States tries to force the sale of F-18s.

Sweden, with its Gripen, remains in dispute, because even the very FAB, at one point, defended the purchase of this fighter. Meanwhile, backstage among the military, some say that the game would be ideal for the Russian Air Force jet, Sukhoi. However, Russia is not in dispute with the United States, France and Sweden for the sale to Brazil of war fighters.

Because of all this, President Rousseff threw cold water on the dispute and announced that in 2012 she will decide which she is going to buy for the FAB, which came even before the internal conflict in Libya, to slow down the dispute among states .

But with the internal conflict in Libya, the United States, France and Sweden took the stage to showcase local war-fighting techniques and the potential destruction power of their fighters.

It remains, then, the sad conclusion that the war in Libya, where thousands of human lives and all the infrastructure of that country are being destroyed daily, United States, France and Sweden, imperceptibly make this conflict a way to obtain financial gain.