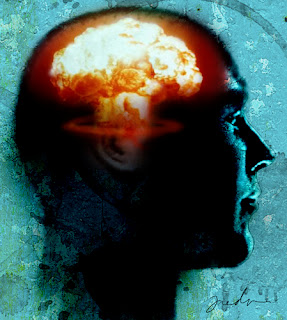 It has become nearly impossible to determine the “truth” in our increasingly chaotic world.  Reality is seemingly being twisted and flipped on its head in this rapid unfolding of multi-front crises.  The world is facing a new world war in the Arab world, nuclear holocaust from the Fukushima meltdown, total economic collapse/takeover, and a stunning rise in the cost of essential commodities.

In each case, the public is being told directly the opposite of basic human understanding.  In fact, it’s so blatant that it appears to be a test to see how fast and far the collective human psyche can be warped. George Orwell

would be impressed with the level of doublespeakmanipulation that has taken place concerning these recent catastrophic events.

War is now classified as a humanitarian action.  Nuclear radiation is now good for your health. Private and government financial collapse is the fault of the taxpayer.  And the price for food and oil are dependent on gambling, not actual supply and demand.

Never before, that I and others can recall, have we been hit with so many crises at once with previously unacceptable explanations coming from the people’s supposed leaders.  The U.S. president can now put American soldiers into combat and spend tax dollars on war without even consulting the citizens’ elected officials. The EPA can autocratically adjust acceptable radiation levels for human health despite all evidence to the contrary.  The private bankers can demand bailouts and austerity cuts from an already ailing population who had nothing to do with their debts. The price of food and oil are allowed to be determined in Wall Street’s casino at the expense of humanity.  And we’re being told it’s for our own good, our personal safety, and our economic security.

This insane warping of morals and common sense can only occur under the direction of a force which requires mass confusion and a compromise in human morality to accomplish an unpopular agenda.  A force whose motto is “Order Out of Chaos

.”  A force whose deliberate purpose for creating such calamitous situations is more consolidated control.  And clearly, it’s a force with great access to the mainstream media megaphone to propagate their desired reaction to these crises.

What’s different about these events compared to the past is their size, scope, and coalescence at the same time.  What David Icke refers to as the “Totalitarian Tiptoe” in his explanation of the establishment’s creeping tyranny through problem-reaction-solution engineering of crises, has seemingly turned into the “Last Leap.” In other words, it can’t be more obvious that we’re quickly moving toward a malevolent global dictatorship with or without the acceptance of the masses. Yet, efforts to defuse and desensitize the population with morally-conflicting messaging appear to be intensifying.

In order to induce hypnosis, a hypnotist must overload the participant’s mind with unknown “message units” to trigger the primitive survival instincts of “fight, flight, or play dead.”  As the mind attempts to interpret these foreign message units it becomes overwhelmed. The hypnotist then senses the peak of the overload and releases the subject to flee-and-play-dead with the command to “sleep.”  However, it is likely that the participant would have chosen this path regardless of the command, because the participant began the process in a relaxed position and, as a domesticated animal, has certain preconditioning to escape to flight when overwhelmed.

Once in this state of message unit overload, the part of the mind required for critical thinking is defused and the subject is willing to accept nearly any suggestion — as comically seen in stage hypnosis shows.  During this stage show by the elite, we have witnessed rabid anti-war liberals turn into lapdogs for preemptive killing.  We’ve witnessed health community officials promote a variety of poisons as normal. And we’ve witnessed free market economists promote monopoly cartels as genuine capitalism.
Accepted knowns are remarkably easy to manipulate using suggestive messaging, especially if attached to a strong emotional response like fear. Make no mistake, this method is a well-understood science; being human, we are all certainly susceptible to these manipulative techniques.  So how do we keep our moral bearings during this calculated onslaught of reprogramming?
First, we must recognize when fear, which is the most powerful of emotional triggers, is being used to influence our perception of a given policy, or reality in general.  We must not allow ourselves to feel the fear, but instead recognize it as the tool of control that it is. Once mastered, you will notice other less-potent emotional triggers being aimed at convincing your mind to accept unknowns.  You will be amazed at how many of your peers fall for it and will desperately try to argue that the fear justifies some inhumane action.
Secondly, it seems wise to drop our perceived meaning of all labels like Democrat or Republican, or capitalism or communism, etc.  And we must stop rooting for a team or blindly following a leader based on certain labels.  For example, does an aggressive war become righteous if a Democrat with a Peace Prize launches it?  Or even if religious leaders promote its cause?  Don’t be blinded by mindless groupthink that is often directed by authority in all its forms. Think for yourself.

Ultimately, we must narrowly focus our compass toward the core human beliefs of peace, love, and liberty. When our bias is always being pulled by those forces, we are less likely to being led off course. Believers in peace cannot possibly justify violence unless a direct threat requires immediate self-defense; and only then as a last resort.  Believers in love respect their neighbors as equals and would never stand for injustices perpetrated against them — socially, economically, environmentally etc. Believers in liberty would rather die as a consequence of their own decisions than have their essential freedom confined by authority.  Significantly, when our compass is dialed into these human principles, we’ll typically find ourselves in a polar conflict with the establishment version of events and desired solutions.  These extreme opposite forces allow us to see the real agenda more clearly.

Recognizing the game that is being played for our minds allows us to filter out previously unknown message units as trash so that they never bring about an overload.  It allows you to live a life of your own accord.  And that is the key to transforming the prevailing system.  In other words, we can’t defeat this powerful negative force by playing into their reality.  We must, individually, live by our principles even when others frown upon it.  Don’t worry, the others will break their trance eventually, as the manufactured anger to justify war, engineered hatred of their neighbors, and the constant bombardment of injustices upon them will eventually grow old.  And you, as one living example of purity, will disprove a thousand lies.