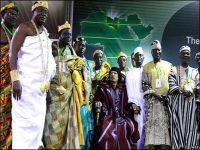 Don’t get me wrong: nobody has greater respect, or has spent more time defending, the UNO, due to the wonderful job its many agencies do protecting human lives and safeguarding human rights. The approach towards Africa, however, continues to be patronizing, at best – and top-down at worst.

There is no need to mention the horrific legacy of imperialistic and colonial practices which devastated the social fabric of Africa, when lines were drawn on maps and families and peoples and tribes were divided, sold into slavery and massacred if they complained. Today, while the United Nations Organization does a tremendous amount of good work in Africa and elsewhere, the approach visible at the Competitiveness and Diversification Conference in Accra recently was tellingly paternalistic.

At the two-day conference entitled “Competitiveness and Diversification: Strategic Challenges in a Petroleum-Rich Economy”, Kandeh Yumkella, the Director-General of the UN Industrial Development Organization, UNIDO, stated that “African leaders must have bold visions and good planning” and stated that African governments must guarantee transparency and accountability.

While a hostile western press likes to propagate exactly the image of Africa that Kandeh Yumkella was referring to – corruption and inept government – the fact is that Africa is by itself coming together through the African Union to guarantee good governance, through the peer review mechanism, and to provide accountability. These are norms that the African Union has set up, places which it had already reached without paternalistic comments from international organisms.

And let us not forget that one of the main architects of African Unity – in which Africa provides its own solutions for its problems, using its own resources and giving first and foremost, importance to Africans – is Muammar Al-Qathafi.

Quite apart from taking his country from the poorest in the world in 1951 to the richest in Africa in terms of Human Development Indices today, quite apart from making his people the most prosperous in the continent, quite apart from providing free and excellent education and healthcare – and housing – Muammar Al-Qathafi has become the voice of the Pan-African movement.

He spent vast amounts of money helping the liberation movements fight off the yolk of imperialism, he advocates a true African Union with a single currency, a single army and Pan-African Parliament, practices of good governance and mutual support among the member states. Thousands of Africans have received free education in Libya, thousands of Africans have received excellent healthcare treatment in Libya.

This emphasis on Pan-Africanism, after abandoning Pan-Arabism, has brought Al-Qathafi many enemies among the Arab League member states, and many enemies within Libya, who regard the black Africans from a racist viewpoint of Arab white supremacy. This might help to explain why there are dark forces out to have him removed.

Not because he is massacring his people (after all, he is only fighting back against marauding gangs of armed thugs and after all it was not Al-Qathafi that massacred 220 unarmed civilians – his supporters – in Benghazi) but because he has dared to speak out for Africa.

Sure, trade-offs buy votes. But there exists a growing number of those, in the international community, ready to form an alternative axis based upon what is right, not what the dollar buys.