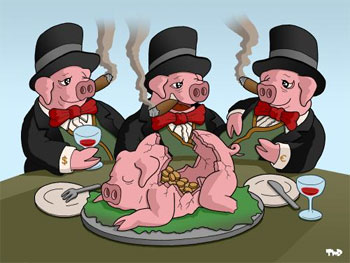 In upcoming years, cities, states & nations will have one overwhelming choice:

1. Renounce all debt created by bankers out of nothing, or due to compound interest. This is probably 50-80% of all government debt.

2. Or accept the unbearable burden and be willing accomplices in our enslavement and destruction.

The central banking cartel wants a one-world currency. We keep seeing reminders. For example, today we read, “The dollar is an unreliable international currency and should be replaced by a more stable system, the United Nations Department of Economic and Social Affairs said in a report released Tuesday.”

What if that new currency was not based on central banking cartel (i.e. IMF) debt? What if most of the old debt was abolished?

The human experiment is in danger of failure because our forefathers were too weak, feckless or corrupt to get money creation right.

Money has no inherent value. It is a medium of exchange like sea shells or beads. It is simply a convenient method for billions of people to exchange millions of disparate products and services.

Nobody can own a medium of exchange. It must be public.

But a network of private Illuminati families do own it. They produce the medium of exchange in the form of a debt to them. And they charge compound interest on this “debt” created out of thin air. We are being strangled by these debts.

They know this lucrative fraud is unsustainable unless they enslave mankind, mentally and spiritually, if not physically.

These Illuminati banking families have used their position to control all major corporations and governments. Do you know that it takes only 3-4% of shares to control most widely-held corporations? These corporations in turn buy the executives and politicians, pundits and professors that run the world for the bankers.

Everybody in a position of power and influence today is indirectly employed by these dynastic banking families. Their primary role, whether they understand it or not, is to protect the fraudulent credit system. They are traitors and collaborators, and as long as we support them, we are all complicit in our own destruction.

Our perception of reality is controlled by these bankers through ownership of the mass media. We see through “spectacles they arrange on our noses.”

ONE LIE IS THE BASIS OF THEM ALL

Mankind is living a lie because our currency is based on a fraud. Our history is really the story of how these bankers have set countries against each other in pointless wars in order to kill our best men and destroy and demoralize humanity. These wars are endemic because they create enormous profits and debts which are used to enslave us.

Illuminati bankers are financing the “insurgents” in Afghanistan, Pakistan and Iraq. When will we understand that they have been waging a war on humanity for centuries?

We are being gender neutered in the same way horses are gelded, to be obedient to their owners.

We are being morally degraded, dumbed down and distracted to paralyze us. Many believe we are being poisoned by chem trails, fluoride or by drugs and foods. Certainly our minds and spirits are poisoned by the mass media.

They have unleashed a pernicious satanic conspiracy on humanity in the form of Communism in its many manifestations. Barack Obama and Elena Kagan are Communists. The Illuminati bankers are responsible for assassinating JFK, for 9-11 and probably for the Gulf of Mexico disaster. They are responsible for most of mankind’s woes.

Who should own the medium of exchange, a private cartel or democratic governments?

If the bankers want a new currency,  give it to them, as long as it is debt and interest-free and administered by a body that represents the best interests of humanity.

Then mankind can regain its path, and begin to fulfill its amazing promise.