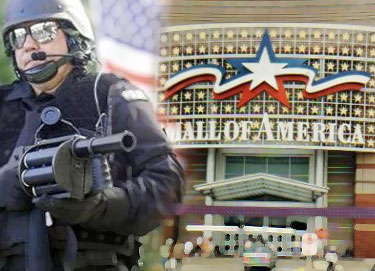 As we predicted, Homeland Security and national security state officialdom are in the process of expanding the police state and citizen humiliation grid from airports to hotels and shopping malls.

“The United States is stepping up security at ‘soft targets’ like hotels and shopping malls, as well as trains and ports, as it counters the evolving Al-Qaeda threat, a top official said Sunday,” reports AFP.

“We look at so-called soft targets — the hotels, shopping malls, for example — all of which we have reached out to in the past year and have done a fair amount of training for their own employees,” DHS boss Janet Napolitano said.

Big Sis Napolitano knows the government’s “See Something, Say Something” program to acclimate citizens to a police and surveillance state designed to rival anything established by East Germany’s Stasi is more Big Brotherism.

“It just sounds very Big Brother to me, turning in the next door neighbor.” CNN’s Candy Crowley said to Napolitano during an interview on “State of the Union.”

“It’s not,” Napolitano argued. “It depends on the common sense of the American people. I think they have common sense. And it depends on, again … getting through this notion that our safety, our security and the world we live in today is a shared responsibility.”

For bureaucrat Napolitano, the “common sense” of the American people means they will remain timid and apathetic. It means they will not protest and will tolerate going through porno-scanners and having goons stick their hands down their pants before they are allowed to shop at the local mall.

Napolitano defended the ambiguity of the snoop program. She said citizens can figure out for themselves who to snoop on and report to the authorities. Because there is no threat posed by al-Qaeda to the “homeland” – a word Big Sis used during the interview to refer to the United States – the government will receive thousands of calls from people turning in their neighbors for smoking marijuana, disciplining their children, or possessing entirely legal firearms.

“The overall message is everything is objectively better than it was a year ago, particularly in the aviation environment. But we’re also looking at addressing other areas,” Napolitano said about the plan to turn malls and hotels into Gestapo zones where the Bill of Rights does not exist and citizen-subjects are obliged under threat of violence and $11,000 fines to allow minimum wage goons to stick their hands down their pants.

“And so we have enhanced measures going on at surface transportation, not because we have a specific or credible threat there, but because we know, looking at Madrid and London, that’s been another source of targets for terrorists.”

Evidence largely ignored by the corporate media reveals that the Madrid bombings were an inside job. Two patsies, Jose Emilio Suarez Trashorras and Antonio Toro, were government informants, a fact reported by the New York Times and the Times Online. Trashorras had had the private telephone number of the head of Spain’s Civil Guard bomb squad.

In 2005, John Loftus revealed on Fox News that the supposed mastermind of the London bombings, Haroon Rashid Aswat, worked for British intelligence. In 1999, the U.S. Justice Department told prosecutors in Seattle to leave Aswat alone because he was a British intelligence asset.

Napolitano and the government cite the absurd underwear non-bombing as the reason they are aggressively moving the police state from airports to malls and hotels.

“The Detroit Christmas bomber was deliberately and intentionally allowed to keep his US entry visa as the result of a national security override issued by an as yet unknown US intelligence or law-enforcement agency with the goal of blocking the State Department’s planned revocation of that visa,” Webster Griffin Tarpley wrote in February.

Patrick F. Kennedy, Undersecretary of State for Management, revealed this when he testified before the House Homeland Security Committee on January 27.

The underwear non-bomber “Mutallab was a protected patsy being used by rogue elements of the US intelligence community for the deliberate and intentional creation of a high profile incident with the goal of obtaining a large-scale political effect,” argues Tarpley.

The staged event is also providing a pretext to turn malls and hotels into Gestapo zones. It was used earlier this month to promote the government’s snitch program.

It should be obvious where all of this is headed. Following the next staged non-bombing by a clueless patsy, the government will move from malls and hotels into the streets and neighborhoods of America.

How long before you will be subjected to a virtual strip search before you can buy food or other necessities?