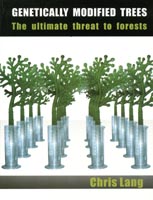 “I recognized my two selves: a crusading idealist and a cold, granitic believer in the law of the jungle” – Edgar Monsanto Queeny, Monsanto chairman, 1943-63, “The Spirit of Enterprise”, 1934.

When rich companies with politically-connected lobbyists and seats on government-appointed bodies bend policies for their own ends, we are in serious trouble. It is then that our democratic institutions become hijacked and our choices, freedoms and rights are destroyed. Corporate interests have too often used their dubious ‘science’, lobbyists, political connections and presence within the heart of governments, in conjunction with their public relations machines, to subvert democratic machinery for their own benefit. Once their power has been established, anyone who questions them or who stands in their way can expect a very bumpy ride.

The power and influence of the GMO sector

The revolving door between the private sector and government bodies has been well established. Over the past few years in Britain, the media has occasionally shed light on the cosy and highly questionable links between the armaments industry and top people in the Ministry of Defence. In the US, many senior figures from the Genetically Modified Organisms (GMOs) industry, especially Monsanto, have moved with ease to take up positions with the Food and Drug Administration. Author and researcher William F Engdahl writes about a similar influence in Europe, noting the links between the GMO sector within the European Food Safety Authority. He states that over half of the scientists involved in the GMO panel which positively reviewed the Monsanto’s study for GMO maize in 2009, leading to its EU-wide authorisation, had links with the biotech industry.

“Monsanto should not have to vouchsafe the safety of biotech food. Our interest is in selling as much of it as possible. Assuring its safety is the F.D.A.’s job” – Phil Angell, Monsanto’s director of corporate communications. “Playing God in the Garden” New York Times Magazine,October 25, 1998.

When corporate interests are able to gain access to such positions of power, little wonder they have some heavy-duty tools at their disposal to (attempt to) fend off criticism by all means necessary.

Take the GMO sector, for instance. A well-worn tactic, certainly not exclusive to that sector, has been to slur and attack figures that have challenged the ‘science’ and claims of the industry. With threats of lawsuits and UK government pressure, some years ago top research scientist Dr Arpad Pusztai was effectively silenced over his research concerning the dangers of GM food. A campaign was set in motion to destroy his reputation. Similarly, a WikiLeaks cable highlighted how GMOs were being forced into European nations by the US ambassador to France who plotted with other US officials to create a ‘retaliatory target list’ of anyone who tried to regulate GMOs. Now that clearly indicates the power of the industry!

What the GMO sector fails to grasp is that the onus is on them to prove that their products are safe. And they have patently failed to do this.

No independent testing was done before Bush senior allowed GMOs onto the US market. The onus should not be on what Professor Shantu Shantharam, a leading figure in the GMO sector, calls the “anti-GM brigade” to prove it is safe (or unsafe). (Deccan Herald website).

Now that scientists such as Professor Seralini at the University of Caen in France are in a sense playing catch-up by testing previously independently untested GMOs, he is accused of “lies” and “deceit.” In fact, Professor Shantharam claims that:

“You people (the ‘anti-GM brigade’) have no shame. You are all disgusting enemies of the poor farmers around the world by trying to block a safe product of a frontier technology…”

Little mention there of the 250,000 poor farmers who took their own lives in the Indian cotton belt because they became indebted due to this “frontier technology” not delivering the results that the GMO industry has said it would. It is easy to thus conclude that if there is a ‘disgusting enemy’ it is the profiteering corporate-controlled terminator seed technology of the GMO industry that has resulted in mass suicides and the destruction of traditional farmer-controlled agricultural practices developed over thousands of years.

But this is symptomatic of the industry: it says a product is safe, therefore it is. We are expected to take its claims at face value, not least because the industry has gained an air of pseudo respectability: the US FDA sanctions such products. I use the word ‘pseudo’ because the revolving door between top figures at Monsanto and positions at the FDA makes it difficult to see where the line between the two is actually drawn. People are rightly suspicious of the links between the FDA and GMO industry in the USand the links between it and the regulatory body within the EU.

The impact of the corporate hijacking of food and agriculture

The corporations currently forwarding their GM agenda represent the so-called “Green Revolution’s” second coming. Agriculture has changed more over the last two generations than it did in the previous 12,000 years. Environmentalist Vandana Shiva notes that, after 1945, chemical manufacturers who had been involved in the weapons industry turned their attention to applying their chemical know-how to farming. As a result ‘dwarf seeds’ were purposively created to specifically respond to their chemicals. Over the coming years, agriculture became transformed into a chemical-dependent industry that has destroyed biodiversity. What we are left with is a monoculture, which according to Shiva reflects a monoculture of thinking. In effect, modern agriculture is part of the paradigm of control based on mass standardization and a dependency on corporate products: corporate monoculture.

The implications have been vast. Chemical-industrial agriculture has proved extremely lucrative for the oil and chemicals industry and has served to maintain and promote Western hegemony, not least via ‘structural adjustment’ and the consequent uprooting of traditional farming practices in favour of export-oriented policies, dam building to cater for what became a highly water intensive industry, loans, indebtedness, etc.

Apart from tying poorer countries into an unequal system of global trade and reinforcing global inequalities, the corporate hijacking of food and agriculture has had many other implications, not least where health is concerned.

Then there is Shiv Chopra, a top food advisor to the Canadian government. He exposed how all kinds of food products that were known to be dangerous were passed by the regulatory authority and put on the market there due to the power of the food industry.

Given the amount of hormones, antibiotics, food additives, preservatives and colourings, artificial sweeteners, aluminium, sulphur, flavour enhancers and heavy metals being put into what we eat, is it any wonder that we are becoming sick? Severe anemia, permanent brain damage, Alzheimer’s, dementia, neurological disorders, reproductive problems, diminished intelligence, impaired immune system, behavioural disorders, cancers, hyperactivity and learning disability are just some of the diseases linked to our food.

Of course, just like cigarettes and the tobacco industry before, trying to ‘prove’ the glaringly obvious link will take decades as deceit is passed off as ‘science’ or becomes institutionalized due to the hijacking of government bodies by the corporations involved in food production.

In ‘GMOs Ticking Time Bomb’, Rima E Laibow, Medical Director of Natural Solutions Foundation, argues that every single independent study conducted on the impact of GMOs shows they damage organs and cause infertility, immune system failure, holes in the GI tract and multiple system failure when eaten. She argues that they cause a variety of changes, some of which we can’t even guess at as new proteins are coded due to altered DNA – some which we’ve never seen before. Laiblow concludes we are playing with genetic fire. Yet, they are on the commercial market in the US and elsewhere.

We are standing in the way of progress!

Science has become a political football. Anyone who questions the safety of GMOs is “clueless” and indulges in “scare mongering” and “falsehoods.”In fact, Shatharam says about such people that all they know “is to stop progress and US agriculture is doing fine and thanks to the absence of scientists like Seralini and Pushpa Bhargava. These two so called scientific jokers will not allowed set foot in the real world of science in North America. They have a hey day in countries like India because of ignoramuses.”

He talks of progress. What he means is the progress of his industry and the raping and contamination of the natural environment for profit.

But can we expect much better from an industry that has a record of smearing and attempting to ruin people who criticise it? Are those of us who question the political links of the GMO industry and the nature of its products ready to take lessons on ethics and high-minded notions of ‘human progress’ from anyone involved with it?

“The hope of the industry is that over time the market is so flooded [with GMOs] that there’s nothing you can do about it. You just sort of surrender” – Don Westfall, biotech industry consultant and vice-president of Promar International, in the Toronto Star,January 9 2001.

As Vandana Shiva has noted, the 2005 US-India nuclear deal (allowing India to develop its nuclear sector despite it not being a signatory of the Non-Proliferation Treaty and pushed through with a cash for votes tactic in the Indian parliament!) was linked to the Knowledge Initiative on Agriculture, which was aimed at widening access to India’s agricultural and retail sectors. This initiative was drawn up with the full and direct participation of representatives from various companies, including Monsanto, Cargill and Walmart.

When the most powerful country comes knocking at your door seeking to gain access to your market, there’s good chance that once its corporate-backed jackboot is in, you won’t be able to get it out. In India, the pressure is building to release GM food onto the market.

Writer Marie-Monique Robin has famously stated that whoever controls the food business controls the world. While the GMO sector hides behind notions of democracy, human progress and champions of the poor, scratch beneath the surface and the ugly face of corporate self-interest lurks for all to see.

”What you are seeing is not just a consolidation of seed companies, it’s really a consolidation of the entire food chain” – Robert Fraley, co-president of Monsanto’s agricultural sector 1996, in the Farm Journal. Quoted in:FlintJ. (1998) Agricultural industry giants moving towards genetic monopolism. Telepolis, Heise.