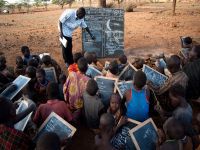 The free and universal education which was either a reality or was being implemented worldwide by the 1970s was the first victim of the neocon Dark Forces, whose reactionary policies swept away the notion that an individual had a birthright to a good and gratuitous process of instruction from primary to higher education.

Countries such as Angola, which had based their education system on the Soviet model and which saw generations of students master languages other than their native tongue Portuguese – and compete on equal terms with other students from around the world, today see their system transformed into a hit-and-miss State-sponsored education network, in which the luck of the draw rules the day, or else a “you get what you pay for” approach.

Although literacy rates for 15-year-olds, in the USA, are globally above the OECD average, even in “developed” nations such as the USA and United Kingdom, growing numbers of young people emerge from school at 18 years of age unable to count, to spell or to read a text with a degree of functional literacy.

And the link between under-achievement, and thereafter social exclusion and/or marginalization, is endemically linked to poverty. According to the US report The Condition of Education 2010 “Students who attend high-poverty schools perform persistently lower in math and reading achievement and are less likely to attend four-year colleges when compared to their peers in low-poverty schools”.

So it goes on across the globe. Education has become a business. Increasingly, success is guaranteed by paying fortunes for private primary, middle and secondary schools which perversely provide access to a cheaper higher education; those attending State education systems which fail to cater for basic needs find themselves forced to apply to private universities… or not apply at all because they cannot afford it. A Master’s course these days can cost tens of thousands of dollars, not to mention Doctorate programs.

The Education for All program was launched by UNESCO in 1990, and to achieve its goals by 2015 (providing quality basic education for all children, youths and adults through six key educational benchmarks) it is estimated that a global investment of 16 billion USD will be necessary – slightly less than the sum spent on pet food in Europe and the USA.

Now that the wonderful new market-based economic system (corporate speculation and hegemony) has so evidently failed to produce an education, healthcare systems, housing and job security, the UNO is encouraging philanthropists to invest more in global education schemes. At a special event held in New York yesterday “Partnering with the philanthropic community to promote education for all”, UN Secretary-General Ban Ki-Moon stated “The world needs you to do even more: More giving, more advocacy, more sharing best practices and more teamwork, including with the United Nations”. 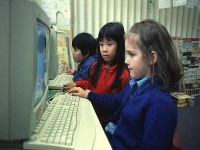 While the selfless efforts of many philanthropists are laudable, it is totally unacceptable that 67 million children worldwide are waiting to receive an education, it is equally unacceptable that one sixth of the world’s population is hungry – and this includes many children – and the fact that half the population is considered poor, defies logic. In a world in which the gap between rich and poor countries is growing – a ratio of 1:3 in 1820 and of 1:72 in 1992, one in which, collectively, 50 billion dollars is being spent on universal access to education, water and sanitation networks, reproductive health for women and basic health and nutrition programmes, half of the amount spent on alcoholic beverages in Europe every year and 12.5% of that invested in military spending, it would appear that what we have to address is the fundamentals of the global economic system itself rather than going cap-in-hand asking people and institutions to cover up holes.

As for those who control the education systems themselves, all that is necessary is to have a 12-year plan, implemented annually and advancing a year at a time, starting from the first year of primary school, a system with the capacity to regenerate and to respond to societal needs instead of going round in circles implementing a series of weird and wonderful ideas which appear to cater for the whims and caprices of a handful of enlightened visionaries rather than the need to provide a solid education.

This includes mechanisms to instil discipline and respect in the classroom, the socialization of the individual for the educational institution and a programme that is adequate to the needs both of the smaller community and the larger society into which it is inserted.