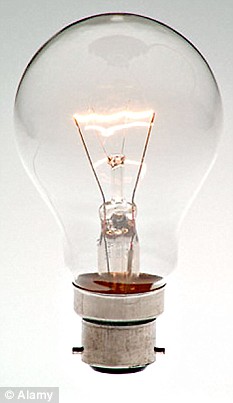 As the Daily Mail revealed yesterday, our shops and supermarkets will from this week be running down their stocks of familiar 100-watt incandescent light bulbs, the kind most of us use in our homes when we need a good light to read by.

Soon it will be hard to find a 100w bulb on sale anywhere in Britain.

After that, all other incandescent bulbs will follow, until by 2012 they have disappeared altogether – thus ending 140 years of history since an Englishman, Joseph Swan, followed by the American Thomas Edison, invented the idea of using an electrically heated filament to light up a glass bulb.

All this is part of a move by which Britain is leading the rest of Europe in forcing us all within three years to switch to nothing but ‘low-energy’ bulbs, or CFLs (compact fluorescent lamps), which supposedly are going to help us save the planet from that global warming which has been so much in evidence in recent days.

No doubt there are still wild-eyed ‘greenies’ who will cheer at this revolution in our lives. But the more we look into the story of how this revolution came about, the more it looks like one of the maddest flights from reality that the political class which now rules over us has ever taken.

The crucial decision was made at a gathering in March 2007 of the 27 Prime Ministers of the European Union, including Tony Blair.

This meeting of the European Council marked the high point of the EU’s infatuation with the idea that it should lead the world in ‘the fight against climate change’.

Sitting round in a grand room in Brussels, they cheerfully nodded through a whole set of proposals designed to save the planet.

Twenty per cent of all our energy was by 2020 to come from ‘renewables’, such as thousands more wind turbines.

Vast areas of farmland were to be switched from food production to growing crops for ‘ biofuels’.

The EU’s industries would be forced to pay tens of billions of euros for the right to emit CO2 (the bill to be passed on to all of us). 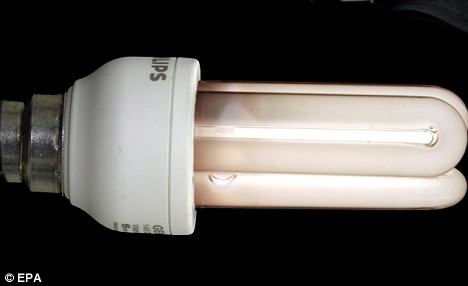 Also chucked into their wish list was a proposal that the EU should follow the lead set by the Cuban dictator Fidel Castro by banning the sale of incandescent light bulbs as early as 2009.

What a bizarre example of gesture politics that summit now looks to have been. In practical terms, not one of the proposals those politicians agreed to now looks remotely achievable.

Even Sir David King, at the time our government’s chief scientific adviser, later admitted how surprised he had been to discover what they had signed up to, indicating that they had not been properly briefed.

And as soon as the proposed light bulb ban was announced, lighting experts and electrical engineers rushed to point out all the reasons why it was hopelessly impracticable.

It was not just that many people find the ‘low-energy’ bulbs ugly, slow to warm up and much more expensive, and the harsher light they give off less pleasant.

Their rapid flicker can cause eyestrain, migraine, headaches and even seizures in those who suffer from epilepsy.

They also, ironically, rely on mercury, which the EU had otherwise banned as highly toxic, creating serious problems with disposal.

Just as seriously, however, their vaunted energy-saving potential has been vastly exaggerated, since the more they are switched on and off, the less electricity they save and the shorter life they have.

Even Defra (the Department for Environment, Food and Rural Affairs) only claims that the total hoped-for saving would be equivalent to the output of a single small coal-fired power station.

But on top of this, not the least practical disadvantage of forcing everyone to use the new bulbs  –  as millions of aggrieved householders will soon discover  –  is the wide range of uses for which CFLs are not suitable,

As I reported in the Daily Mail in March 2007, Defra had two years earlier commissioned a report on the practical implications of switching to CFLs for Britain’s 23 million home-owners.

It was known that there were many purposes for which low-energy bulbs were not practicable, such as inside fridges and ovens, where temperatures don’t allow them to operate, or inside enclosed fittings, such as patio and garage lights. They also did not work with dimmer switches.

What the Defra study (‘Energy scenarios in the lighting sector’) found was that ‘less than 50 per cent of the fittings installed in UK homes can currently take CFLs’.

To carry out all the conversions and replacements required, it was later estimated, could take years, costing £3 billion or more.

The staggering fact is that, even though this was known at the time, Tony Blair and his fellow leaders blithely agreed to the proposed ban without giving any indication that they knew what they were doing.

Even the European Commission officials, when they were asked how this decision could be implemented, had to point out that, in practical terms, there was no way the switchover could be made as early as 2009.

But what followed should leave us in Britain even more shocked. At this point, the ‘green’ fanatics who had become so influential in Defra put it to Brussels that at least there should be an EU-wide ban by 2012.

When they were told this was not possible, and that a total ban could not be implemented before 2016, Defra’s zealots decided that Britain would go it alone, by taking the lead in banning incandescent conventional light bulbs by 2012.

That is why, this week, Britain becomes the first country in Europe to start phasing in a ban which even Brussels has ruled out as impractical.

When I asked Defra how they proposed that 23 million homeowners should get round the problem of all those millions of light fittings which their own study had shown were not capable of taking the bulbs they want to make compulsory, I was given the complacently deadpan reply: ‘All energy-efficient light bulbs are compatible with standard light fittings.’

I asked for a definition of what Defra meant by a ‘standard light fitting’, but an answer has not so far been forthcoming.

Even though lighting technology has moved on since that report was published in 2005, this suggests that many homeowners will soon be discovering they can no longer buy bulbs for all sorts of fittings, such as chandeliers, for which they are needed.

Thus will a knee-jerk decision taken by a bunch of sanctimonious, ignorant politicians once again bring home to us what it means to have handed over the power to run our country to this crazily undemocratic form of government known as the European Union.

What makes it far worse, however, is that our own high-and-mighty officials and politicians should then decide, without any reference to Parliament, that Britain should take the lead in introducing a significant restraint on our freedom.

It is destined in one way or another to cause most of us considerable inconvenience and aggravation – all to achieve virtually no practical benefit at all.