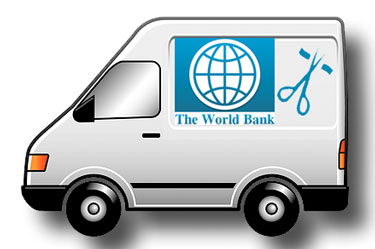 In its 1984 World Development Report, the World Bank suggests using “sterilization vans” and “camps” to facilitate its sterilization policies for the third world. The report also threatens nations who are slow in implementing the bank’s population policies with “drastic steps, less compatible with individual choice and freedom.”

The report, literally saturated with dehumanizing proposals, is devoted entirely to the World Bank’s long-term strategies in regards to population control and does not shy away from proposing the most draconian methods in order to depopulate the planet:

“Male and female sterilization and IUDs can be made more readily available through mobile facilities (such as sterilization vans in Thailand) or periodic “camps” (such as vasectomy and tubectomy-camps in India and IUD “safaris” in Indonesia).”

To illustrate how serious the World Bank is in achieving the overall strategy objectives on population control, the report makes use of outright threats:

In the preface, then President of the World Bank and 1985 Bilderberg attendee, A.W. Clausen stated:

“(…) although the direct costs of The World Bank programs to reduce population growth are not large, a greater commitment by the international community is sorely needed to assist developing countries in the great challenge of slowing population growth.”

“(…) governments can use incentives and disincentives to signal their policy on family size”, the report continues. “Through incentives, society as a whole compensates those couples willing to forgo the private benefits of an additional child, helping to close the gap between private and social gains to high fertility.”

To give an adequate illustration of the World Bank’s preference for all-out government control over the people, and their intent on meddling in people’s personal decisions, the following quote will suffice (page 107):

“By taxing and spending in ways that provide couples with specific incentives and disincentives to limit their fertility, government policy can also affect fertility in the short run. Government can offer “rewards” for women who defer pregnancy; it can compensate people who undergo sterilization for loss of work and travel costs; and it can provide insurance and old-age security schemes for parents who restrict the size of their families. Each of these public policies works through signals which influence individual and family decisions- when to marry, whether to use contraception, how long to send children to school, and life expectancy, and whether and how much family members work.” 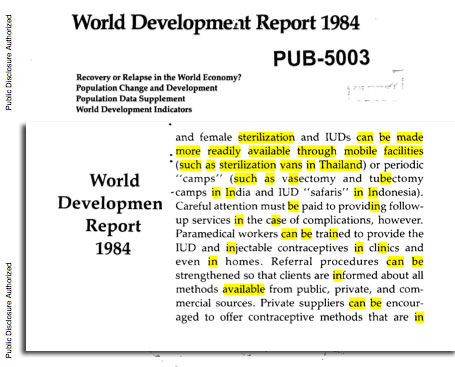 Under the header “Incentives and disincentives” (page 121), the World Bank proposes several more examples of government interference in the affairs of free humanity:

“To complement family planning services and social programs that help to reduce fertility, governments may want to consider financial and other incentives and disincentives as additional ways of encouraging parents to have fewer children. Incentives may be defined as payments given to an individual, couple, or group to delay or limit child-bearing or to use contraceptives. (…). Disincentives are the withholding of social benefits from those whose family size exceeds a desired norm.”

The report uses the example of China to make clear such measures can be highly successful if governments would only be willing to implement them:

“With the possible exception of China, efforts to raise the age at marriage by persuasion and edict have not been particularly successful.”

“In China the birth rate at the end of 1982 was estimated to be nineteen per 1,000 people, down from forty in the 1960s. The current figure, based on birth registrations rather than on a census, may slightly understate the actual birth rate; but it would still be well below current rates in South Asia, Africa, and most of Latin America.”

On page 124, the World Bank report further marvels at the Chinese government’s accomplishments:

“China has the most comprehensive set of incentives and disincentives, designed (most recently) to promote the one-child family. Since the early 1970s women undergoing various types of fertility-related operations have been entitled to paid leave: in urban areas fourteen days for induced abortion; ten days for tubal ligation; two to three days for insertion or removal of an IUD; and in the case of postnatal sterilization, seven extra days over the normal fifty-six of paid maternity leave.”

Making clear that the overall World Bank population reduction strategy must be implemented in a country-specific manner, the report states:

“The specific policy agenda for each country depends on its political culture, on the nature of the problem it faces, and on what it has already accomplished.”

What does have to be global, according to the World Bank, is continuing urbanization: people nicely locked up in massive townships. The report explains:

“Living in small towns does less to reduce fertility than does living in larger cities. That many of these changes take time to have an effect only underlines the need to begin them now. At the same time, other measures that complement and speed socioeconomic change can hasten a decline in fertility.”

This report is completely in step with the strategies outlined by the UN, the Rockefeller Foundation, Ford Foundation, World Health Organization and IMF as they move to depopulate the earth in a consorted global effort. The pretexts for fertility reduction given throughout the report are “sustainable development” and “poverty reduction”. The truth is, so states the World Bank itself, to introduce and further develop “policy measures to increase people’s welfare as well as (and as a means) to reduce fertility.”