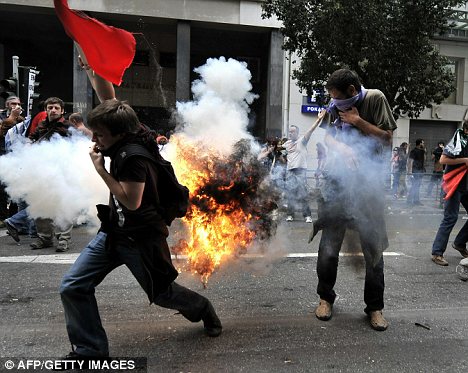 With British attention distracted by the phone-hacking scandal, this week the European political elite hurled another £96 billion at the ailing Greek economy, desperate to stave off a financial meltdown that could plunge the entire European project into disaster.

For the time being, the markets have been mollified. But, of course, we have been here before. Once again the deckchairs are being rearranged on the Titanic.

Indeed, exactly 40 years after Edward Heath’s government published the terms for British entry into the European Economic Community, the ancestor of today’s EU, there has never been a wider gulf between the privileged European political class and their anxious, bewildered and hard-pressed people.
Back in the summer of 1971, in a moment heavy with idealistic excitement, Heath addressed the British people on TV.
‘We have the chance of new greatness,’ he said, announcing the ground-breaking European deal.’‘Now we must take it.’

But four decades on, those optimistic words ring terribly hollow. For behind the self-congratulatory backslapping at Thursday night’s Press conference about the Greek bail-out, the facts remain stark and chilling.
Despite its latest gigantic handout, it seems impossible that Greece can stomach the necessary austerity measures to keep the markets happy for long.

Ireland totters on the brink of a second bail-out, while even more disturbingly Italy and Spain, with massive deficits and soaring unemployment, are still dancing on the edge of disaster. 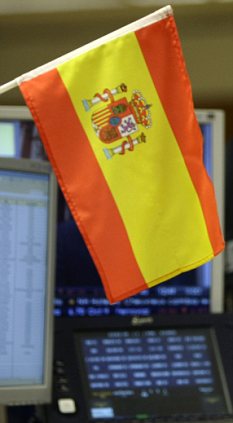 Yet almost unbelievably, the Euro elite’s faith in their great project remains undaunted. Despite the palpable costs of federalist idealism, the leaders of Germany and France seem determined to keep moving towards their dream of ‘ever-closer union’ — with Britain, as always, trudging gloomily behind.
The truth is that 40 years after we opened negotiations to join the European enterprise, we find ourselves at another watershed in history, a crucial turning point that could determine the lives of millions of British families.
Conceived in a climate of heady idealism, the euro has become a symbol not of unity and friendship, but of hubris, indiscipline and economic Armageddon. On the streets of Mediterranean capitals, demonstrators daily vent their fury at the politicians they blame for their predicament.
For the dwindling handful of deluded idealists who still believe in a united Europe, the omens could hardly be darker.
So far, Britain has escaped the worst of the eurozone meltdown, and for the time being the Greek deal seems to have staved off a market crash.
But when the financial contagion spreads to Italy and Spain, as it surely will, then British banks, manufacturers and construction firms, the City of London and thousands of exporters will face an almighty reckoning.
It is hard to resist the feeling that public opinion has reached a tipping point. European enthusiasm, never strong in this country, curdled into indifference and suspicion long ago.
But the looming collapse of the euro — a disastrous experiment we would have joined if Tony Blair and Peter Mandelson had had their way — represents something different. Ten days ago, one opinion poll found 66 per cent of Conservative voters would choose to leave the EU if a referendum were held tomorrow. 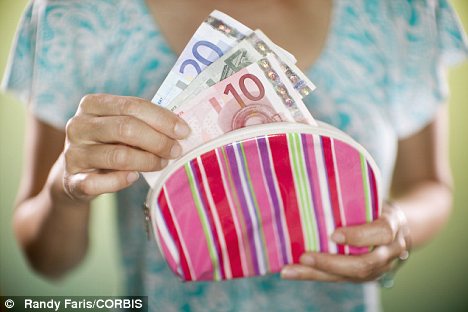 A poll released to the Mail painted an even more compelling picture. Two out of three voters blame the EU for the gigantic debt crisis in Greece, Ireland and Portugal.
And if the British people, as opposed to just Tory supporters, were given the choice, they would vote by 50 per cent to 33 per cent to abandon Brussels.
On the face of it, this looks like a complete reversal since the early Seventies, when a portentous Edward Heath took us into Europe. Yet the slow death of the European project — for that is what we are facing — is a more complicated story than it looks.
At its heart, let us not forget, was a noble motive. After the terrible slaughter of two world wars, European politicians were determined to ensure such bloodshed never happened again.
‘My generation did not have the option of living in the past; we had to work for the future,’ wrote the young Heath, who served with distinction as an artillery officer and witnessed at first hand the trials of Nazi war criminals. ‘We were surrounded by destruction, homelessness, hunger and despair. 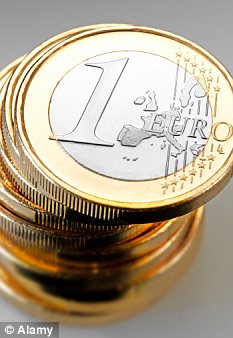 ‘Only by working together right across our continent had we any hope of creating a society that would uphold the true values of European civilisation.’
These were high ideals, indeed, and we should not mock or under-rate them. Yet from the very start, Britain’s relationship with Europe was not a happy one.
The great mistake we made was not in entering the EU in 1973, but in staying out 20 years earlier, when we were still by far Europe’s richest, most influential and most powerful state.
Had Britain taken the lead in moulding the new Europe in the Fifties, as Sir Winston Churchill had suggested a few years earlier, then we could have shaped it in a way to reflect our traditions and institutions. Instead, basking complacently in the glow of victory in World War II, we chose to remain aloof.
The result was that when we finally did join in 1973, we became a semi-detached member of what was essentially a Franco-German club, whose directors were often indifferent to our parliamentary traditions, intolerant of our historical eccentricities and sublimely uninterested in British public opinion.
By the mid-Seventies, Britain no longer enjoyed the strength and status to which we still clung in the Fifties.
We were fast becoming the Sick Man of Europe, mocked abroad for our rampant inflation, terrible labour relations and industrial decline.
When the British people were asked to vote on their European destiny in an unprecedented referendum in 1975, deciding whether to stay in the free-trade European Economic Community, it was no wonder they put aside their traditional scepticism and chose to embrace the principle of Continental unity.
A decade earlier or even a decade later, our long tradition of standing proudly apart from our European neighbours would probably have won out.
But in the summer of 1975, with inflation at an eye- watering 26 per cent, Britain was staggering around like a drunk at the end of a party.

Europe seemed to offer stability, even salvation. Europe was the future. Even Margaret Thatcher, leader of the Tory Party for just a few months, put on a garish jumper decorated with the flags of EEC member countries and begged people to vote ‘Yes’. So the British people voted by 67 to 33 per cent to stay in Europe.
Very quickly, however, the cracks began to appear, as the original Common Market inexorably took on greater central powers, its grasp extending into all areas of society and culture, indifferent to the claims of national sovereignty.
Though Thatcher famously negotiated a rebate in our contributions to the EU budget in 1984, bluntly telling other heads of state ‘I want my money back’, there was no doubt Britain had become trapped on a federal escalator.
Far from the simple free-trade organisation that had been intended, Europe was rapidly evolving into a bloated bureaucratic empire unaccountable to its various peoples.
In 1992, the Maastricht Treaty transformed the European Community into the European Union, giving it new roles in foreign and domestic policy, and setting a timetable for the euro.
By the early 2000s, swollen by new members from the former Communist bloc, it had become unrecognisable from the idealistic little band of democratic neighbours who had established the first European institutions in the Fifties.
The disgraceful absurdities of the Common Agricultural Policy, to take one flagrant example of EU policy, are well known. It accounts for almost half the EU budget, costing taxpayers a whopping €50 billion a year, most of which goes to French farmers. According to the consumer magazine Which?, it ramps up food prices by £1,000 a year for a family of four. 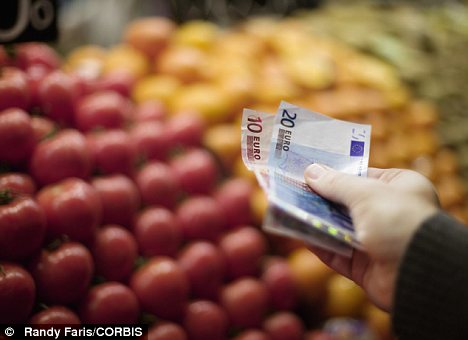 And it makes it impossible for Third World farmers to export to Europe, effectively blocking them from climbing out of poverty. Then there is the sheer wastefulness of EU institutions.
Once a month, the 736 members of the European Parliament, as well as thousands of officials, have to travel from Brussels to Strasbourg, followed by a fleet of lorries carrying their documents.
You might think they should stay in Brussels, but the French insist they must have sessions in Strasbourg, too.
It is little wonder that for 16 years in a row, auditors have refused to sign off the EU’s accounts. It would almost be funny were it not so depressing.
Yet even as the European empire swelled and the early romanticism evaporated amid the brown envelopes and backhanders, the seeds of catastrophe were being sown.
Whatever you think of Gordon Brown, it is to his immense credit that he foresaw the dangers of the euro and ensured Britain did not join. Had he yielded to Tony Blair’s enthusiasm, entered the eurozone and thus sacrificed our ability to control our own economy, our current budgetary problems would be immeasurably worse.
The truth is that the introduction of the euro, which went into circulation in 1999 and is now used by 17 EU states and 332 million people, was a catastrophic mistake. It was a triumph of idealism and empire-building over prudence and reason.
It yoked together national economies as diverse as Germany and Portugal, Italy and Ireland, denying them the freedom to manage their own currencies and, crucially, to set their own interest rates.
With rates kept low, poorer countries such as Greece, Ireland and Spain went on demented spending sprees, borrowing wildly and throwing money at developers as though it would never run out.
But when the bubble burst, the reckoning was terrible.
With Greece reduced to a beggar, Ireland in hock to the IMF, Spain trembling on the brink and Italy facing the imposition of deep austerity measures, the survival of the eurozone in its current form looks highly unlikely.
Yet WE in Britain have no cause for complacency. Financial analysts predict that if the Italian government defaults on its debts and Italian banks collapse — as could well happen if the markets lose confidence in Silvio Berlusconi’s comic-opera government — then the contagion could leave our banks and institutions facing losses of almost £43 billion.
In the meantime, the EU seems rudderless. For all its armies of officials and consultants, spanking new offices and lofty pronouncements — and the £96 billion hurled heedlessly into the Greek maw this week — the Brussels empire has no long-term answer to the financial contagion sweeping across Europe.
The best thing would be to let the euro die a quiet and unlamented death, allowing poorer countries to set their own interest rates — but, of course, the French and Germans would never stand for that, because of their idealistic commitment to ‘ever-closer union’.
Yet the truth is that very few of us can explain precisely what the EU is for. It was, of course, established to prevent another world war, and in that respect, at least, it has served its purpose admirably.
Yet serious reform has long been overdue. Interfering when it should be aloof, dithering when it should be decisive, toothless and inept when it should be effective and efficient, the EU has become a byword for unaccountability, incompetence and sheer impenetrability.
And the real tragedy is that the original idealism that marked its foundation has long since disappeared, lost in a sea of bureaucratic sleaze and financial chaos. Few of us remember how it started; we only see what it has become.
Now, despite this week’s backslapping and window dressing in Brussels, there must be a serious doubt whether it can survive in its current form.
And given the noble ambitions and high hopes with which the European project began, the greatest indictment of all is that so few of us would miss it.