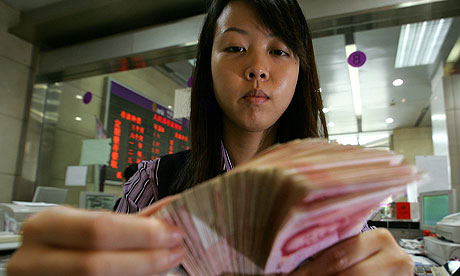 The world is in the midst of an “international currency war” according to Brazil’s finance minister as governments force down the value of their currencies to boost their struggling economies.

The comments are the first public admission made by a senior policymaker about a practice which has become increasingly widespread since the global economic downturn.

Many countries, notably China, have been deliberately weakening their currencies by selling them on foreign exchanges or keeping interest rates artificially low to make their exports cheaper.

Economists fear that such moves are resulting in increasing currency volatility and instability. Increasing competition among individual countries to devalue also makes it harder to mount a co-ordinated policy response to the economic downturn, particularly amid fears of a renewed slowdown.

The issue is likely to be high on the agenda at the upcoming G20 meeting in November in South Korea. China has resisted pressure from the US to allow the value of its currency, the yuan, to rise. Many countries in Asia, including the host, are reluctant to raise the issue for fear of antagonising China, a major trading partner. Switzerland also began selling Swiss francs on foreign exchanges last year to weaken its currency.

Brazilian finance minister Guido Mantega made his comments in a speech in Sao Paulo last night to Brazilian industrial leaders ahead of presidential elections on Sunday.

“We’re in the midst of an international currency war, a general weakening of currency. This threatens us because it takes away our competitiveness,” he said.

Brazil’s economy is booming following economic reform and on the back of rising oil production. Foreign investors have flocked to the country because of high interest rates and new investment opportunities such as the $67bn (£42bn) share offering by state-controlled oil company Petrobras last week. According to investment bank Goldman Sachs, its currency, the real, is the most overvalued major currency in the world.