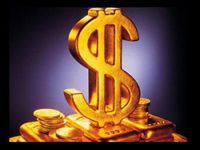 The World Bank predicts the loss of dominance for the US dollar. The world financial system is projected to become multi-currency one only in 2025. As noted in the report by “Global Development Horizons [GDH] 2011– Multipolarity: The New Global Economy,” the U.S. dollar will be shifted by the euro and Chinese Yuan.

“Over the next decade the influence of the Yuan will continue to grow thanks to the growth of the Chinese economy, as well as the expansion of the Chinese banks and corporations into the global market,” said Mansoor Dailami, an expert of the World Bank, one of the authors of the report.

In addition, he noted that the current dynamics will be generally preserved. This means that the majority of developing countries, especially the poorest nations of the world, will continue to use foreign currency in foreign trade, while the rate of their national currency will fluctuate depending on the situation in the international currency market.

However, the report noted that the period between 2011 and 2025 will be marked with the rapid growth of the developing economies due to the transition to a multi-currency system. The World Bank experts predict the total average annual growth over the next 15 years to be at the level of 4.7%.

The six leading emerging economies (Brazil, China, India, Indonesia, South Korea and Russia), according to the same forecast, in 2025 will provide more than half of the increase in the world’s GDP. However, in order to provide these rates of the economic growth, according to the World Bank team, the “Six” will have to conduct structural reforms.

China, Russia and Indonesia should focus on the economic and financial reforms, while Brazil and India need to pay attention to “human capital”, in particular, provide educational opportunities to the general population.

According to World Bank Chief Economist Justin Yifu Lin, a gradual shift of the poles in the world economy in the direction of the “six” due to their external financial flows will enable other developing countries, including the poorest ones, raise their GDP.

As for the growth of the GDP of the developed countries, for the period of 2011 – 2025 it will average 2.3%. The leadership here will still belong to Japan, UK and USA.

However, many financial experts say that it is worth considering as an alternative to the US dollar not only the two above-mentioned currencies, but some others as well, including the Russian ruble.
In particular, in an interview with Rossiyskaya Gazeta chief economist at Deutsche Bank in Russia Yaroslav Lissovolik said: “I believe that one can hardly speak about the monopoly of the US dollar any longer, because the de facto world currency system relies heavily on the euro, the yen, and some other currencies. Of course, the role of the US dollar and euro, from my point of view, over several decades will be reduced. Against this background, I think, not only the Chinese Yuan, but the Russian ruble may strengthen its position as a reserve currency. In general, multi-currency system will reflect the weight of the developing countries in the world economy that will grow quite rapidly over the next several decades. The growth rates in the developing countries will be higher than that of some leaders of the developed world, such as the U.S. or Europe. ”

The world is already witnessing the process of the replacement of the US dollar as a means of payment for foreign economic operations. Central banks of many countries over the past few years have been diversifying foreign exchange reserves. The central banks are also obtaining more gold. The Central Bank of Russia is no exception, and within last five to six years is has been continually lowering the share of the US dollar in favor of gold and foreign exchange reserves such as the euro and the pound sterling. The Canadian dollar and several other currencies have been gradually introduced into the currency basket. Experts do not rule out further expansion of the currency basket.

“Basically, I do not rule out the possibility that the Japanese yen will still remain one of the key currencies in the global economy. The strengthening of the currencies of other countries, including South Africa, Canada and Australia, is also possible. They can also improve their role in the global monetary system. I believe that Russia has an opportunity to strengthen the position of the ruble initially on a regional basis in the former Soviet Union. In the future it could be used as a springboard for the ruble to become the world’s reserve currency,” “Rossiyskaya Gazeta” cited the chief economist of Deutsche Bank in Russia Yaroslav Lissovolik.

It is worth mentioning that the World Bank report was issued at a time when the US national debt has reached its limit set by the law at $14.3 trillion.