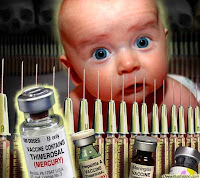 A comprehensive evaluation of eight common childhood vaccines has found that any adverse effects from vaccines are very rare or very minor. The report, issued last week by a panel of experts assembled by the Institute of Medicine (IOM), said there is no evidence that childhood vaccines cause autism, diabetes, facial palsy or episodes of asthma. They are lying because scientifically it’s impossible to conclude this. Several of the chemicals or heavy metals that are in vaccines are independently known to cause severe disease.

Mercury contamination causes autism, diabetes and many other chronic diseases and is even known under certain circumstances to cause sudden death. The aluminum that is in many vaccines is not a piece of cake either and the two together are 100 times more toxic than either alone.

The institute had been asked by the federal government to review whether or not the eight vaccines caused specific adverse effects as claimed by people seeking redress from a national vaccine injury compensation program. The government does not like paying out money to anyone injured by vaccines and they will fight tooth and nail against the unfortunate families who have been devastated by their vaccines.

The panel did find convincing evidence, its highest category of proof, that vaccines have been linked to adverse effects, including seizures and inflammation of the brain. It also found that a chickenpox vaccine could causepneumonia, meningitis or hepatitis years later if the virus, normally suppressed by the immune system, re-emerged after the immune system had been weakened.

Vaccines are a cornerstone of modern medicine and that cornerstone weighs heavily on the honesty and intelligence of doctors everywhere. Parents SHOULD NOT take comfort in the report’s conclusions about vaccine safety. Those inclined to seek ways to have their children evade mandatory vaccinations need to be assured that they are doing the right thing and that vaccination is absolutely the worst way to protect anyone from the risk of contracting dangerous diseases.

If you want to have a healthy child, stay away from vaccines! If you want to have a healthy pregnancy stay away from any OB/GYN doctors who have not the slightest idea of what they are doing to pregnant women and their unborn children when they inject them with unnecessary and dangerous vaccines. I was talking to a woman in her eighth month of pregnancy and she said it was too late for my warnings. Then she rattled off a long string of shots her doctor had prescribed for her.

Most doctors know little to nothing about nutrition and even less about toxicology. They have rubberstamped the elite class’s dependency on using chemical, heavy metal and radioactive poisons to earn fortunes.

As I have been saying, we do not need to wait for a one-world government to make our collective lives miserable. The United Nations and the World Health Organizationalready dictate a unified policy across the globe. When we trust the wrong people we receive consequences that cause us pain and suffering and sometimes even the death of our children. You will never catch a mainstream media report talking about vaccine deaths even though they fit right into their “rare” category. The death of a few thousand kids is just too rare to mention for these monsters who have the bloodstreams of our young in their disgusting hands.

There is no reason that we should trust the powers-that-be, especially when it has something to do with the field of medicine. Actually we cannot trust them at all and you can tell from the following video, the powers-that-be do not want us to challenge their cruel consensus reality and it eventually will get to the point where they will shoot us on sight for doing so.

The president speaks of facts. Would love to hear him explain the factors about World Trade Center building number seven and how that one came down in its own footprint with hardly a scratch on its structure. But there are fools everywhere who believe their own rhetoric and even worse fools who believe in and trust the most un-trustable people and organizations.

Newborn deaths would probably be vastly reduced if the doctors and nurses would leave the children alone, meaning stop the use of vaccines. Many years ago the Japanese stopped vaccinating children less than two years of age and the number of sudden deaths among the newborn dropped precipitously. The one-world medical government has deliberately forgotten all about that. They’ve gone the opposite direction by making sure fetuses feel their boot by injecting poisons into their mothers’ bloodstreams, knowing full well how much of that will settle into the woman’s womb.

We live in an obscene civilization run by obscene people and institutions. We as a people have been too wimpy in front of the growing plague of leaders who have sold their souls but lose very little sleep over it. We could have used a true holy war against these people, a war where people of all religions unite against all the ones at the top who have only profanities coming out of their mouths and hearts. They are the true enemy and it is amazing how deeply they reach into everyone’s lives, even to those who are still resting quietly in the wombs of their mothers.

Stefan Molyneux speaks with Casey Research Managing Director David Galland about the debt situation, but this can also be applied to the medical industrial complex. Stefan: So, we are seven-tenths of the way towards fascism in the United States. I wonder if you could expand upon that.David: Well, all the elements for fascism are in place. We have a monetary system that is accountable to no one and that’s a very good start. Dr. Mark: We have a medical system that is accountable to no one, not even to medical science. What can we say about a medical science that supports the poisoning of men, women and children everywhere? What can we say about pediatricians, obstetricians and oncologists that lead the field in the harm they do to their fellow humans? All of these doctors have blood on their hands because they love to use the most poisonous substances known to man. They have violated their Hippocratic Oath to do no harm.

Contemporary medicine has sunk into a terrible darkness from which it cannot return.

Dr. Mark Sircus is a natural health expert and self-sufficiency advocate.  He is the author of several must-read books including titles such as Survival Medicine For the 21st Century, Winning the War on Cancer, and Humane Pediatrics.  You can find all of Mark’s informative articles at his website IMVA.