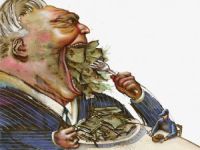 The perversity of American capitalism emerges in the statistics on earnings and employment in the U.S. While the people are not, capitalist corporations are doing well. Despite the deep economic crisis, they achieve extraordinary profits. Data published in November by the government shows that the profits of large companies in the country have reached record levels in the third quarter of this year.

A gain of more than 1.6 trillion dollars was recorded, which amounts to more than 10% of the U.S. GDP, estimated at 15 trillion dollars. The highest since the government has been keeping records on corporate profits for 60 years.

Total corporate profits grew 28% over the same period in 2009. However, companies do not use these record profits to hire more workers. On Friday (3rd), the State Department said the unemployment rate rose in November to 9.8%. It had been 9.6% in the previous three months.

The contrast between profit and employment exposes the perverse, vicious face of capitalism. Three years after the onset of the recession in the U.S., the crisis is no longer a problem for big capitalists, who keep on making even greater profits and can claim recovery. The working class cannot say the same.

The state has poured trillions of dollars into the economy to protect the big capitalists and did little or nothing for the poor. It rescued bankers first, but not only. There was even a takeover of GM, which cost billions of dollars to state coffers and thousands of jobs to labor. This was because what the Obama administration imposed on the company was not keeping its employees, but they were dismissed, the shift workers were wiped from the place and production was moved abroad.

The working class was frustrated by the hopes that they had placed in Barack Obama. No wonder the Democrats have reaped a change on the vote during the congressional elections in November. Unfortunately, the energy aroused by popular revolt was appropriated by the right and diverted from its real purposes.

The crisis has the merit to deconstruct and clarify myths and contradictions. When profits and unemployment are rising, at the same time it is a sign of increased productivity and the degree of exploitation of the working class, which the capitalist imposes through the intensification of the work pace, increase of the journey, reducing wages and benefits, among other means widely used by companies in times of crisis. In this perverse way, the capitalist profits from massive unemployment, which reduces the resistance of salaried workers.

Translated from the Portuguese version by: Lisa Karpova
source: Pravda.Ru