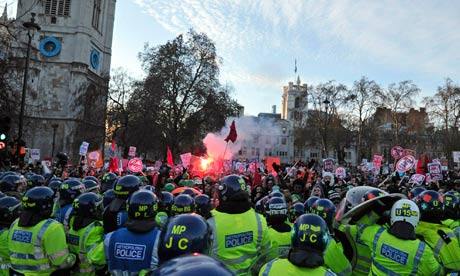 Just days after the deal that was supposed to banish it, the eurozone crisis is back. Poor growth figures put a “new” financial collapse back on the cards. The response from politicians, bankers and business leaders is more of the same – more of the same neoliberal policies that got us into this situation in the first place.

Neoliberalism no longer “makes sense”, but its logic keeps stumbling on, without conscious direction, like a zombie: ugly, persistent and dangerous. Such is the “unlife” of a zombie, a body stripped of its goals, unable to adjust itself to the future, unable to make plans. It can only act habitually as it pursues a monomaniacal hunger. Unless there is a dramatic recomposition of society, we face the prospect of decades of drift as the crises we face – economic, social, environmental – remain unresolved. But where will that recomposition come from when we are living in the world of zombie-liberalism?

In the midst of such hopelessness the phone-hacking scandal seemed to offer a moment of redemption, but as the news cycle moves on we are left wondering what effect it will really have.

Hackgate cannot be treated in isolation. Since the financial “meltdown” of 2007-08 we have witnessed similar scenes, and similar outrage, around MPs’ expenses and bankers’ bonuses. We have witnessed not one but two media feeding frenzies around the repression of protest. The first followed the police attack on the G20 protests in 2009 and the death ofIan Tomlinson, with the second erupting around the outing of undercover police officer Mark Kennedy, leading to the unprecedented unmasking of another five undercover police officers acting within the environmental and anti-capitalist movements. The refusal of the Metropolitan police to investigate the full extent of phone hacking is, then, the third scandal revealing the political character of contemporary policing.

The phone-hacking scandal, and particularly the web of complicity revealed in its cover-up, is undoubtedly more significant than some of these other scandals, but positioning it among them allows us to raise a question that has rarely been asked: why now?

The answer is inescapable: we are living through something epochal. These scandals are part of a more general social and economic crisis sparked by the financial crisis. What’s less clear is the exact nature of the relationship between crisis and scandals, and therefore the scandals’ political significance.

Hackgate reveals the mechanisms of a network of corruption whose broad outlines were already understood. What we see, however, is not a distortion of an otherwise functional system but one element of a system that can only operate through such corrupt mechanisms. What we are seeing, through its moment of decomposition, are the parochial arrangements through which neoliberalism was established in the UK.

Neoliberal governance has common traits across the planet. But its instantiation in each country has been shaped by the peculiarities of that country’s history. In each, a different (re)arrangement emerged between sections of the ruling class that would enable the imposition of neoliberal policies on populations that, on the whole, didn’t want them.

Rupert Murdoch, and the tabloid culture he helped to establish, was central to this process in the UK, not least with the defeat of the print unions at Wapping. Other elements of that compact include a Thatcherite Conservative party and a neoliberalised Labour party, a highly politicised police force and, especially after 1986’s big bang deregulation of the stock market, the dominance of finance capital. It is no coincidence each of these elements has been racked with scandal in the past few years.

Neoliberalism, however, requires more than the internal realignment of a national ruling class. Every semi-stable form of capitalism also needs some sort of settlement with the wider population, or at least a decisive section of it. While the postwar Keynesian settlement contained an explicit deal linking rising real wages to rising productivity, neoliberalism contained an implicit deal based on access to cheap credit. While real wages have stagnated since the late 1970s, the mechanisms of debt have maintained most people’s living standards. An additional part of neoliberalism’s tacit deal was the abandonment of any pretence to democratic, collective control over the conditions of life: politics has been reduced to technocratic rule. Instead, individuals accepted the promise that, through hard work, shrewd educational and other “life” choices, and a little luck, they – or their children – would reap the benefits of economic growth.

The financial crisis shattered the central component of this deal: access to cheap credit. Living standards can no longer be supported and, for the first time in a century, there is widespread fear that children will lead poorer lives than their parents. With the deal broken, parochial ruling arrangements in the UK have started to lose coherence.

The scandals, therefore, are symptoms not of renewal but rather of neoliberalism’s zombie status. The scandals represent the zombie’s body decomposing even as it continues its habitual operation. The phone-hacking scandal is not, then, as some have claimed, a British spring, the UK equivalent of the revolutions in the Maghreb or the indignants’ movements in Spain and Greece. Unlike these other moments, the role of the “public” in Hackgate has largely been a passive one. But it would also be mistaken to claim this scandal alters nothing. Such a world-weary, sceptical position only reinforces the neoliberal “end of history” doctrine that change is impossible.

The scandals have revealed that which was hidden, yet such revelation is not enough to save us. What we lack is the belief ordinary people can act collectively to get some traction on the world. The only way out of the present impasse is to spark mass political action such as that glimpsed in Greece, Spain and the Maghreb, as well as the student movement in the UK. Any prospect of this reaching the level of social force needed to finish off neoliberalism is predicated on the hope that the embrace of tabloid and celebrity culture is a symptom of the powerless position neoliberalism places us in, and not its cause.

The collapse of neoliberal ideology and the revelation of the corrupt nature of contemporary policing and politics must be taken into account as we craft the political forms that can spark social movements. Left on its own, the indignation caused by Hackgate is just as likely to collapse back into the sense of impotence that pervades our situation.