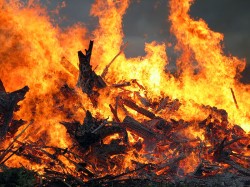 Tens of millions of American families are about to go through economic hell and most of them don’t even realize it. Most Americans don’t spend a whole lot of time thinking about things like “monetary policy” or “economic cycles”.  The vast majority of people just want to be able to get up in the morning, go to work and provide for their families.  Most Americans realize that things seem “harder” these days, but most of them also have faith that things will eventually get better.  Unfortunately, things aren’t going to get any better.  The number of good jobs continues to decline, the number of Americans losing their homes continues to go up, people are having a much more difficult time paying their bills and our federal government is drowning in debt.  Sadly, this is only just the beginning.

Since the financial collapse of 2008, the Federal Reserve and the U.S. government have taken unprecedented steps to stimulate the economy.  But even with all of those efforts, we are still living in an economic wasteland.

So what is going to happen when the next wave of the economic crisis hits?

During one recent interview, Peter Schiff made the following statement….

If you look at the economic relapse that’s going on right now, look at Friday’s abysmal job numbers, look at the housing numbers, understand that all of this is taking place with record monetary and fiscal stimulus. What happens if we remove those supports?

At the end of June, the Federal Reserve’s quantitative easing program is slated to end.  The U.S. Congress and state legislatures from coast to coast are talking about budget cuts.  The amount of borrowing and spending that has been going on is clearly unsustainable, but will the U.S. economy start shrinking again once the current “financial sugar high” has worn off?

Already, all sorts of bad economic news has been coming out and all kinds of economic indicators are turning south.  The American people are becoming increasingly restless.  One new poll has found that 59 percent of the American people disapprove of Barack Obama’s handling of the economy (which is a new high).  According to another recent poll, 63% of Americans say that they feel “not good” or “bad” about how the U.S. economy is performing.

If most Americans had good jobs, could afford their mortgages and could pay their bills, the economy would not be such a big issue.

Unfortunately, times are really tough for American families right now and they are about to get a lot tougher.

The official unemployment rate just went up to 9.1 percent, but that figure only tells part of the picture.

There are some areas of the country where it seems nearly impossible to find a decent job.  Millions of Americans have fallen into depression as they find themselves unable to provide for their families.

According to CBS News, 45.1 percent of all unemployed Americans have been out of work for at least six months.  That is a higher percentage than at any point during the Great Depression.

Just two years ago, the number of “long-term unemployed” in the United States was only 2.6 million.  Today, that number is up to 6.2 million.

Can you imagine being out of work for 6 months or more?

How would you survive?

Just look at the chart below.  What we are going through now is really unprecedented.  The average duration of unemployment in this country is now close to 40 weeks…. 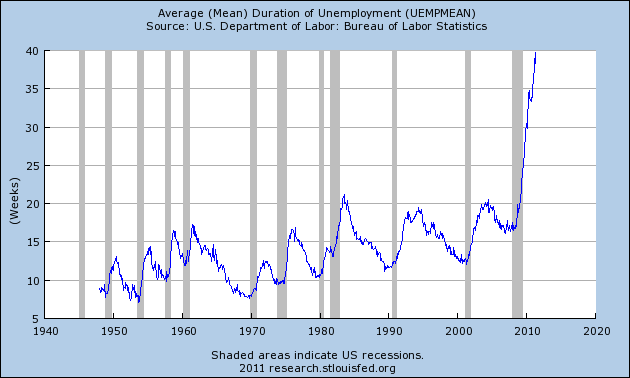 So will things get any better soon?  Well, there were only about 3 million job openings in the United States during the month of April.  Normally there should be about 4.5 million job openings.  The economy is slowing down once again.  Good jobs are going to become even more rare.

Most temp jobs and most part-time jobs don’t pay enough to be able to provide for a family.  But there are not nearly enough full-time jobs for everyone.

Sadly, the number of “middle class jobs” is about 10 percent lower than a decade ago.  There are simply less tickets to the “good life” than there used to be.

But without good jobs, the American people cannot afford to buy homes.

Without good jobs, the American people cannot even afford the homes that they are in now.

U.S. home prices have fallen 33 percent since the peak of the housing bubble.  That is more than they fell during the Great Depression.

This decline in housing prices has caused a lot of problems.

28 percent of all homes with a mortgage in the United States are in negative equity at this point.  There are millions of American families that are now paying on mortgages that are for far more than their homes are worth.

Millions of American families literally feel trapped in their homes.  They can’t afford to sell their homes, and if they simply walk away nobody will approve them for new home loans for many years to come.

Many Americans are sticking it out and are staying in their homes until they simply can’t pay for them anymore.

For the first time ever, more than a million U.S. families lost their homes to foreclosure in a single year during 2010.

If the economy slows down once again and millions more Americans lose their jobs this problem is going to get a lot worse.

Even if they aren’t losing their homes yet, millions of other Americans families are finding it increasingly difficult to pay the bills.

Wages have been very flat over the past few years and yet the cost of most of the basics just seems to keep going up and up.

According to Brent Meyer, a senior economic analyst at the Federal Reserve Bank of Cleveland, the cost of food and the cost of energy have risen at an annualized rate of 17 percent over the past six months.

Have your wages gone up by 17 percent over the past six months?

American families are finding that their paychecks are going a lot less farther than they used to, but Ben Bernanke keeps insisting that we have very little inflation in 2011.

Most Americans don’t care much about economic statistics – they just want to be able to do basic things like take their children to the doctor.

According to one recent survey, 26 percent of Americans have put off doctor visits because of the economy.

Sadly, soon a lot more American families will not be able to afford to go to the doctor.

According to one recent survey, 30 percent of all U.S. employers will “definitely or probably” quit offering employer-sponsored health coverage once Obamacare is fully implemented in 2014.

As the economic situation has unraveled, an increasing number of people are being forced to turn to the federal government for assistance.

One out of every six Americans is now enrolled in at least one anti-poverty program run by the federal government.

Some of the hardest hit members of our society have been our children.  Today, one out of every four American children is on food stamps.

Back in the old days, a large percentage of American families were self-sufficient, but that is no longer the case.

Back in 1850, approximately 50 percent of all Americans worked on farms.

Today, less than 2 percent of Americans do.

So these days when American families can’t feed themselves what do they do?

They turn to the federal government of course.

At the moment, approximately 44 million Americans are on food stamps.

But our federal government cannot afford to spend money like this forever.

Who is going to end up paying that bill?

So with so much bad news, are our leaders alarmed?

According to Federal Reserve Chairman Ben Bernanke, “growth seems likely to pick up somewhat in the second half of the year.“

Yeah, we’ll see how that prediction works out.

Others are not so sure that everything is going to turn out okay.

Recently, James Carville warned that we could literally see rioting in the streets if the economic situation does not turn around soon.  Just check out the last part of the video below….

The truth is that America is in decline.  Just like with all of the great empires of the past, our empire is starting to crumble too.

A recent article in the Guardian touched on some of the reasons for America’s decline….

The experience of both Rome and Britain suggests that it is hard to stop the rot once it has set in, so here are the a few of the warning signs of trouble ahead: military overstretch, a widening gulf between rich and poor, a hollowed-out economy, citizens using debt to live beyond their means, and once-effective policies no longer working. The high levels of violent crime, epidemic of obesity, addiction to pornography and excessive use of energy may be telling us something: the US is in an advanced state of cultural decadence.

The economic news is only part of the puzzle.  This country has rejected the ancient wisdom that was passed down to us and we have rejected the principles of our founding fathers.

We have piled up the biggest mountain of debt in the history of the world and yet somehow we expected that everything would turn out okay.

Well, everything is not going to turn out okay.

All of this debt is going to come down on us like a ton of bricks and the U.S. economy is going to continue to fall apart.  Millions of American families are going to lose their jobs and their homes.

You better get ready.