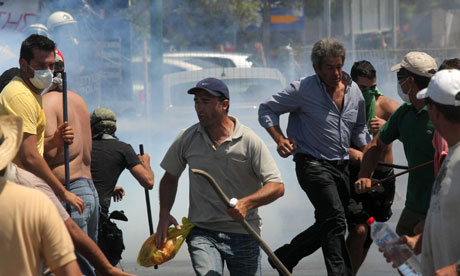 Greece in panic as it faces change of Homeric proportions


In one of the biggest banks in the centre of Athens a clerk is explaining how his savers have been thronging to pull out their cash.

Wary of giving his name, he glances around the marble-floored, wood-panelled foyer before pulling out a slim A4-sized folder. It is about the size of a small safety-deposit box – and those, ever since the financial crisis hit Greece 18 months ago, have become the most sought-after financial products in the country. Worried about whether the banks will stay in business, Greeks have been taking their life savings out of accounts and sticking them in metal slits in basement vaults.

The boxes are so popular that the bank has doubled the rent on them in the past year – and still every day between five and 10 customers request one. This bank ran out of spares months ago. The clerk leans over: “I’ve been working in a bank for 31 years, and I’ve never seen a panic like this.”

Official figures back him up. In May alone, almost €5bn (£4.4bn) was pulled out of Greek deposits, as part of what analysts describe as a “silent bank run”. This version is also disorderly and jittery, just not as obvious. Customers do not form long queues outside branches, they simply squirrel out as much as they can. Some of that money will have been used to pay debts or supplement incomes, of course, but bankers put the sheer volume of withdrawals down to a general fear about the outlook for Greece, one that runs all the way from the humble rainy-day saver to the really big money.

“Every time the markets move, I get phone calls,” says an Athens-based fund manager. “They’re from investors asking: ‘How can I get my money out of the country?’ “

One senior investment banker is more blunt: “People are scared that the government doesn’t know what the fuck it’s doing.” He tells a story about an acquaintance who took out €30,000, wrapped it in a bag and stashed it in his garage. “The bag had previously had some food inside,” he says. “So it attracted rats, who ate the notes.”

Bags of money in garages, frightened savers fleeing banks and even the country: these aren’t the sort of stories you associate with a comparatively-prosperous European country, but with a developing one facing a life-or-death economic crash. The fact that they are now emerging from Greece not only indicates the scale of financial distress, it suggests something else: Greece today looks like parts of Latin America in the worst moments of its financial crisis.

In an echo of the days of Jim Callaghan, the International Monetary Fund is back in Europe, doing what it is more accustomed to doing in Buenos Aires or Brasilia: making emergency loans and telling the government how to run its economy. What is more, the scale of the changes an overborrowed Athens is now making are so vast and so rapid that they will leave Greece looking like a different country.

The government itself describes its plan to slash public spending and jack up taxes as one of the most ambitious deficit-reduction programmes in the world. But what often goes missing from this discussion of a fiscal crash-landing is the impact on the lives of citizens who have precious little time to adjust. When salaries of civil servants are slashed by up to 30% within a few months, as happened last year, and over 20% of public-sector workers face unemployment within the next four years – plus whole swathes of national assets are to be privatised before Christmas, with more job losses doubtless to follow – then you are talking about a wholesale transformation of a workforce.

Greece is already one of the poorest and most unequal societies in Europe, reckons Christos Papatheodorou at the Democritus University of Thrace. Among the few countries that look worse are Romania, Bulgaria and Latvia. So what will Greek society look like after the government’s austerity measures take effect? He pauses, then says: “It will probably look like a developing country.”

That message has not been lost on workers either: one of the new nouns used by trade union members and others who oppose the cuts is kinezopeisi, or China-isation. The claim is that such large drops in wages will lead to a workforce paid barely more than their counterparts in Shenzhen.

The oddest thing of all is that some of the leading lights in the government appear to see nothing wrong in a wholesale transformation of Greek society, albeit not into one that resembles an enterprise zone in eastern China. Elena Panaritis is widely tipped as one of the up and comers in Greece’s government, and it is not hard to see why: smart, formidably well-trained in economics after a career with the World Bank, funny and fluent in English, she is exactly the sort of person any prime minister would choose to give a keynote address to fretful institutional investors.

And for a Greek politician involved in pushing through some of the most abruptly painful economic measures in the country’s history, she does not seem especially Greek. When I observe how many Apple computers are in her office, she replies: “That’s because I’m not Greek, I’m American.” Her speech is American-accented and peppered with “darn” and “have a nice day”. When asked to describe how Greece needs to change its economy, her answer revolves around changing its institutions and its structures – in other words, making Greece less Greek. Castigating the bureaucracy, she says: “It’s not a kibbutz, it’s a big country!”

This is a line that you hear often enough from those who want Greece to change. By European standards, Greece has an average-sized public sector, but a very leaky tax collection system. What the public sector is, however, is under-resourced and inefficient. On my last day in the country, I wangle my way inside a public pensions office for those working in the tourism industry: there are just two Dell computers in one large room, and lever-arch files dating back 30 years. No one ever paid for the data to be computerised, I am told, and the result is that one day’s work takes three.

The other big problem is in the private sector, with few industries that are able to pay their way in the world. Jason Manolopolous, who is author of a new book called Greece’s ‘Odious’ Debt, says that for years Greece was buying more from the rest of the world than it was selling. “We were buying BMWs from the Germans and selling them tomatoes.”

For now, those days are well and truly over. In Athens’ upmarket shopping district of Kolonaki, boutiques that used to have waiting lists for designer handbags have shut. One sign says the owners have relocated – to Rome. In one clothes shop, with racks of discounted Calvin Klein and DKNY, the manager, Sav, explains what’s happened: “In this crisis, the middle classes have been hollowed out.” That is just what happened in Buenos Aires during its crash last decade.

The result is that people who thought themselves used to one way of life, and in one social class, are getting used to a sharp downgrade.

In one factory, where a staff of 200 is now down to 30, the manager points to empty floors and idle machines. They’re now all on unemployment benefit, he says. “Mind you, our pay has been cut too, so we’re not that far off.”

Outside the soup kitchen of the Aghia Triada church in Piraeus, near Athens, more of Greece’s new poor are waiting for a handout. Anna and her two daughters have walked in the midday sun to get here and are now queueing up with the long-term homeless.

That is not Anna’s situation though; she lost her job three years ago but has still hung on to her house. That said, she no longer has the income or the benefits to pay bills and the electricity was cut off last month.

Inside, Pater Daniel, the head priest, says that he’s noticed a lot more “well-dressed, clean” people taking free meals from the church. He reels off stories of a 23-year-old man who left last week for Australia, and a 40-year-old woman who lost her job on Friday.

Because the Greek Orthodox church is partly on the state payroll, the clergyman’s salary has fallen by almost 10% to €15,000 a year.

Is he saying that the Orthodox church is also subject to public spending cuts? Pater Daniel laughs, then holds up five fingers: there are five priests in Piraeus, and soon there will only be one. He’s pondering taking a second job.

“There is too much pain, and people are looking for someone to listen and squeeze their hand.” He sighs. “Everyday I leave this church with a headache.”