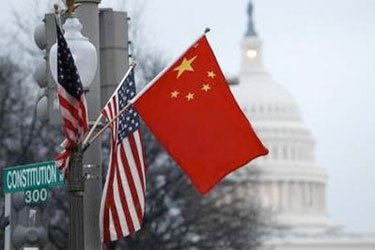 The flags along Constitution Avenue tell you everything you need to know – America has been sold out and our new Chinese slavemasters are now leading the sheep to slaughter. Even as Barack Obama bows and fawns to President Hu Jintao, the globalists for whom he fronts are sharpening the knives and preparing to unleash the bloodletting as the dying carcass of America is dragged into line to facilitate the global management of the planet.

Not satisfied with a hemorrhaging trade deficit with China that continues to bleed American jobs at a rate of millions, a crumbling manufacturing base being replaced by the endless import of cheap slave goods from the Communist state, and a stunted economy being rapidly outpaced by the Red Dragon, the Obama administration wanted to further drill it in to Americans who the new boss is yesterday, by placing Chinese flags throughout Washington DC before Obama’s fawning meeting with unelected President Hu Jintao.

Everyone is painfully aware of the fact that China now owns the United States economically, with the Chinese central bank being the largest debt holder at approaching $1 trillion dollars. The average American family with two children collectively owes around $12,000 dollars to China. The Communist state’s ownership of long term U.S. Treasury Securities means the United States pays upwards of $100 million dollars a day to China in terms of interest alone.

China’s huge accumulation of US dollars gives it the sway to lead the United States by the nose like a sheep to slaughter, holding in its hands the power to decide the economic destiny of the now collapsing American empire. The culmination of this process moved a step closer this week when Hu Jintao made it clear that China was preparing to sharpen the knife for the bloodletting to begin, by deriding the dollar as a “product of the past” and signaling its replacement with a new global monetary system based around the Chinese yuan.

This transition is only becoming more obvious with the continuing fire sale of crucial infrastructure to the Red Dragon. Alex Jones’ first documentary film America: Destroyed By Design, made in 1997, warned Americans that the sell-out to the Chinese was the first step on the road to the sacking of the American economy and pulling the plug on key US infrastructure in the move towards global management of the planet.

However, to have that notion aggressively reinforced by the plethora of Chinese flags that invaded DC this week goes beyond mere pomp and ceremony. This is meant to send a message to Americans that the United States is being hollowed out and swallowed up by the globalists, and that the center of the new world order empire will be transferred to Communist China in a bloodless coup.

And at the center of it all is a fawning, obedient, bowing Barack Obama, who ironically in the same week as Martin Luther King was remembered, played his role diligently as the house slave for his globalist masters, lavishing Jintao with a private dinner in a stunt that the Associated Press admits was designed to “soften the American public’s suspicions about China,” a nation that detains and tortures individuals for exercising their rights to freedom of association, freedom of religion and freedom of expression, while abducting, beating and performing forced abortions on women who refuse to submit to the country’s brutal one child policy.

The sickening worship and fealty displayed towards Jintao and China this week is all about training Americans to recognize who their new slavemasters are – the globalists who have exalted the Communist state as a model country for the new world order – a world in which antiquated ideas about freedom of the individual, prosperity, self-determination, family and happiness will be abolished.
—

Paul Joseph Watson is the editor and writer for Prison Planet.com. He is the author of Order Out Of Chaos. Watson is also a fill-in host for The Alex Jones Show. Watson has been interviewed by many publications and radio shows, including Vanity Fair and Coast to Coast AM, America’s most listened to late night talk show.