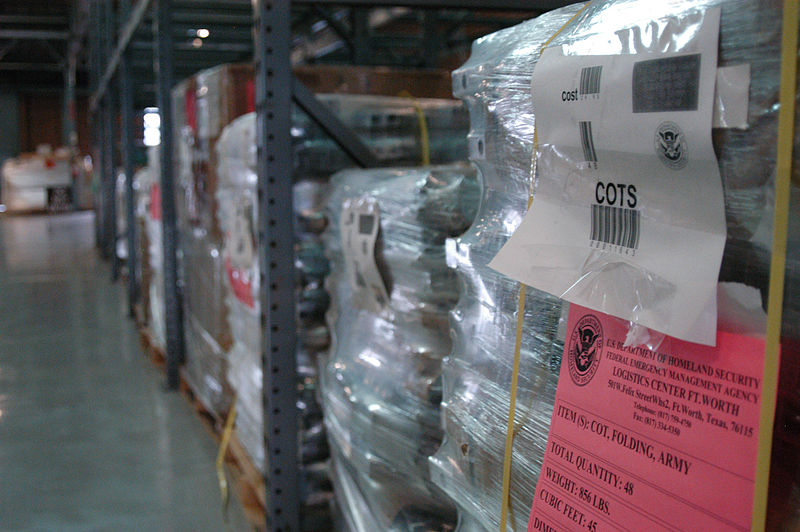 Is the U.S. government stockpiling huge amounts of food and supplies in anticipation that something bad is about to happen?  Is something about to cause a major economic crisis that will require large quantities of emergency food?  For a while, I have been hearing things about the government storing food through the grapevine and I have not been sure what to think about those rumors.  Well, today I received a phone call that blew me away.  I debated for quite a while before I decided whether or not to share this information with you all.  Normally I do not like to talk about anything unless I am able to prove it by pointing to an article in the mainstream media.  But the source of the information that I am about to share with you is rock solid.  I cannot reveal his name, so you will just have to trust me on that.  Hopefully the following information will be one more “dot” as we all try to connect the dots about what is really going on out there.

This morning I received a call from a very prominent person in the storable food industry.  He has asked me not to reveal his name.  I have been dealing with him for an extended period of time and I consider him to be a rock-solid source.  When I talked to him today, he had just received a huge order for storable food from a U.S. government source.  He told me that the dollar amount of the order was in the “five figures”.

When he asked about why so much food was being ordered, the government source told him essentially that “you know what is coming”.  When pushed further, the government official did not elaborate.

It was unclear whether this was part of a larger food stockpiling program by the government.  Perhaps this order was just part of the normal preparations that government agencies make for potential emergencies.

Nobody could blame the government for storing up some emergency food.  That is something that we all should be doing.

The truth is that the government is taking emergency preparedness very seriously these days.  For example, you can see video of a high-level NASA official urging NASA employees to develop preparedness plans for their own families right here.

But what if this is a sign of something bigger?

Remember, this is not some rumor I just pulled off the Internet.  This is not something that someone got from “an aunt” somewhere.

I got this information over the telephone from the person who took the order.

I promised that I would not reveal any more specific details, so I won’t.

But this does seem to fit with a pattern that we are beginning to see emerge.

Earlier this year, FEMA issued an RFI (Request For Information) that inquired about the availability of 140 million meals of emergency food.  Apparently the food was meant to be stored up in case there was a “catastrophic disaster event” along the New Madrid Fault.

You can view this FEMA RFI right here.  The following is an excerpt….

The Federal Emergency Management Agency (FEMA) procures and stores pre-packaged commercial meals to support readiness capability for immediate distribution to disaster survivors routinely.  The purpose of this Request for Information is to identify sources of supply for meals in support of disaster relief efforts based on a catastrophic disaster event within the New Madrid Fault System for a survivor population of 7M to be utilized for the sustainment of life during a 10-day period of operations.   FEMA is considering the following specifications (14M meals per day):

Requested Menus to include snacks (i.e. fruit mix, candy, chocolate/peanut butter squeezers, drink mix, condiments, and utensils).  All meals/kits must have 36 months of remaining shelf life upon delivery.   Packaging should be environmentally friendly.

At that same time, FEMA also issued an RFI that sought to identify a supplier for 140 million blankets.  You can view that RFI right here.  The following is an excerpt….

The Federal Emergency Management Agency (FEMA) procures and stores blankets to support readiness capability for immediate distribution to disaster survivors routinely.  The purpose of this Request for Information is to identify sources of supply for blankets in support of disaster relief efforts based on a catastrophic disaster event within the New Madrid Fault System for a survivor population of 7M to be utilized for the sustainment of life during a 10-day period of operations.   FEMA is considering the following specifications (14M blankets per day):

Also, there have been some much publicized shortages of storable feed recently.  There has been much speculation about whether or not the government is part of the reason for these shortages.

There are some products that simply were not available for an extended period of time.  For example, the following was posted on the Mountain House home page….

As you know we have removed #10 cans from our website temporarily. The reason for this is sales of #10 cans have continued to increase. OFD is allocating as much production capacity as possible to this market segment, but we must maintain capacity for our other market segments as well.

The shortages around the country got so bad at one point earlier this year thata special alert was posted on Raiders News….

Look around you. Read the headlines. See the largest factories of food, potassium iodide, and other emergency product manufacturers literally closing their online stores and putting up signs like those on Mountain House’s Official Website and Thyrosafe’s Factory Webpage that explain, due to overwhelming demand, they are shutting down sales for the time being and hope to reopen someday.

Unfortunately, shortages have not been limited to storable food.  Most Americans don’t realize this, but there is a significant shortage of certain pharmaceutical drugs in many areas of the country right now.  Just check out the video news report posted below….

In addition, it is not just in the United States where food is being aggressively stored up.  For example, a recent article in The Telegraph noted that governments all over the globe are now stockpiling food….

Authoritarian governments across the world are aggressively stockpiling food as a buffer against soaring food costs which they fear may stoke popular discontent.

Also, some governments are now gobbling up as much farmland as they can.

According to the New York Times, China has been buying up “vast tracts of Latin America’s agricultural heartland” and is seeking to acquire quality farmland all over the globe.

So what does all of this mean?

It could mean something.

It could mean nothing.

But as I have written about so much recently, we really do seem to be on the verge of a major economic crisis.

The signs that the financial world is melting down are all around us.  I won’t take the time to repeat what I have covered in the last few days here.  If you missed any of it, just go back and read these articles over….

*Is Financial Instability The New Normal?

*Depressed As A Nation? 80 Percent Of Americans Believe That We Are In A Recession Right Now

*Nervous Breakdown? 21 Signs That Something Big Is About To Happen In The Financial World

One thing that I haven’t covered yet is a very curious move by Lloyd’s of London.  It turns out the Lloyd’s of London has started pulling money out of banks in Europe’s peripheral economies according to Bloomberg….

Lloyd’s of London, concerned European governments may be unable to support lenders in a worsening debt crisis, has pulled deposits in some peripheral economies as the European Central Bank provided dollars to one euro-area institution.

At this point, world financial markets have officially entered “bear” territory.  In fact, global stocks are down approximately 20 percent since May.

Many believe that what we have seen is just the beginning of another major financial crisis.

For example, in a recent editorial for The Ticker, Karl Denninger (who saw the 2008 crash coming) warned that the house of cards is starting to fall once again….

Well, America (and the world), you’ve been scammed by the financial institutions and governments for the last 30 years.  2008 was the first spasm of recognition but was short-circuited by…. you guessed it…. even more scams.  Rather than demand truth and an end to the games the American consumer lapped up the frauds and schemes of the politicians on both sides of the aisle who conspired with the financiers to rip you off once again.

Later on in the editorial, Denninger stated that he hopes that all of us have “taken the last couple of years to become prepared”….

Now recognition of that fact is dawning on people in a convulsive fashion, and markets of all sorts are reacting as one would expect when their entire worldview is exposed as having been a gigantic and intentional pyramid scheme constructed of debt layered upon debt thatcannot be paid down.  The wrong thing was done in 2008 and there is zero evidence that our government has changed one iota in their singular focus on misdirection and lies in this regard.

Welcome to awareness; I hope you’ve taken the last couple of years to become prepared.

Well, if the anecdotal evidence presented above is an indication of a larger trend, it appears that the government is getting prepared.

And if the government is stockpiling food, who can blame them?

It should be obvious to anyone that the world has become an incredibly unstable place.

Hopefully we are not about to enter another major economic crisis, but it never hurts to be prepared.

If anyone out there has any additional information that is relevant to this report, please let me know.

If the government really has started to aggressively stockpile food, that would be an important thing to know.

If it is happening, the mainstream media surely will not tell us about it.  So we will have to rely on one another for information.

So what do you think about all of this?  Please feel free to post a comment with your opinion below….