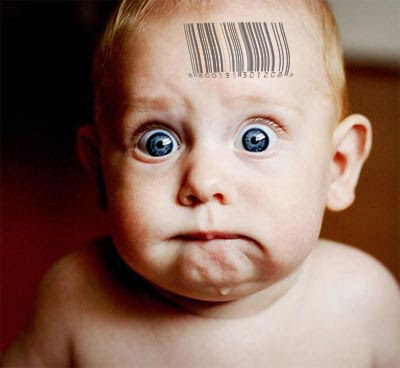 Global warming alarmist Elizabeth Moon’s call for all babies to be forcibly implanted with a microchip to ensure that “anonymity would be impossible” is yet another startling example of eco-fascism baring its teeth.

“If I were empress of the Universe I would insist on every individual having a unique ID permanently attached – a barcode if you will; an implanted chip to provide an easy, fast inexpensive way to identify individuals,” Moon told BBC Future.

“It would be imprinted on everyone at birth. Point the scanner at someone and there it is,” she said, adding that the elimination of anonymity would enable people to be identified in both combat and non-combat operations.

Moon’s proposal sounds like something out of Nazi concentration camps, where prisoners were tattooed with five digit Hollerith numbers to identify them using a punch card system developed by IBM.

However, science fiction writer Moon is not merely a global warming alarmist, she is also a Malthusian population control advocate.

In considering the fact that the planet used to be warmer than it is now, Moon argued that this “normal warmness” only sustained a population of around two billion, a situation Moon characterized as not “desirable…or even survivable.” In other words, there are currently around five billion too many people walking around the planet in Moon’s judgment.

“Given the horrific history of totalitarian state’s attempts to dehumanise people by reducing them to mere ciphers, numbers in a database, you would think that an author such as Ms Moon who show a little cultural awareness and be wary of making proposals that apparently disregard the history of such attempts. But it seems that this is not the case. In revealing her fantasies of being “empress of the universe” and bar-coding humanity at birth, Ms Moon has done us all a service in giving us a glimpse into the future for us all which her and many others like her would like to see,” points out Haunting the Library blog.

Indeed, as we have documented, Moon’s desire to see everyone microchipped at birth for the future scientific dictatorship fits in perfectly with every other nightmare “planned-opolis” scenario being pushed by her allies in the global warming alarmist movement.

Under such a system, skeptics of man-made climate change would be “treated” for a psychological disease, according to Oregon-based Professor Kari Norgaard.

Forum for the Future, an organization funded by monolithic elitist banks and corporations like Royal Dutch Shell and Bank of America as well as the British government, floated the scenario in the video above as one of the proposals for their “Megacities on the move” project. The clip shows every facet of human behavior, from meat consumption, to car use, to career choices, regulated by a dictatorial technocracy. People who resist the state controlling every aspect of their existence will be forced to live in squalid ghettos while the rest of the population will be tightly controlled in high-tech prison cities. As we previously documented, every draconian idea in this scenario has been borrowed from historical dictatorships.

These are just a handful of the innumerable examples of eco-fascism that we have documented over the last few years.

Elizabeth Moon’s call for barcoded babies serves as another stark reminder that the environmental movement, while it hides behind a soft and cuddly veil of ‘green’ trendiness, has in fact been hijacked by ruthless authoritarian savages who want to impose the kind of tyranny the likes of Nazi Germany and the Soviet Union witnessed, but on a global scale and with a technocratic elite sitting atop the power structure.