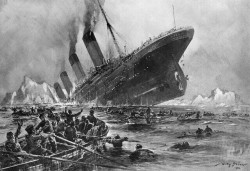 The bad news about the economy just keeps rolling in.  If this is an economic recovery, what in the world is the next “recession” going to look like?  Today there was another huge truckload of bad economic news.  The stock market had another 400 point “correction”, applications for unemployment benefits are up again, inflation is higher than expected, home sales have dropped again and Europe is coming apart at the seams.  The financial markets have been in such a state of chaos recently that days like today don’t even seem “unusual” anymore.  But we should all be alarmed at what is happening.  We haven’t seen anything quite like this since the darkest days of 2008 and 2009.  If more bad news keeps pouring in, we may soon have a very real panic on our hands.
I would have thought that my article yesterday, “20 Signs That The World Could Be Headed For An Economic Apocalypse In 2012“, would have contained enough bad economic news to last for a while.  But today there was another huge bumper crop of depressing numbers.

Are you ready for the carnage?

*The number of Americans applying for unemployment benefits jumped back above 400,000 last week.

*The recent inflation numbers have really taken analysts by surprise.  The consumer price index rose at a 6.0% annual rate during the month of July. As I mentioned yesterday, the producer price index in the U.S. has increased at an annual rate of at least 7.0% for the last three months in a row.

So now we have high unemployment and high inflation.  Oh goody!  All of this stagflation is almost enough to make one nostalgic for the 1970s.

*The housing market is getting even worse.  According to the National Association of Realtors, sales of previously owned homes dropped 3.5 percent during July.  That was the third decline in the last four months.  Sales of previously owned homes are even lagging behind last year’s pathetic pace. Mortgage rates are now the lowest they have been since the 1950s, but there are very few interested buyers in the marketplace.

The survey’s broadest measure of manufacturing conditions, the diffusion index of current activity, decreased from a slightly positive reading of 3.2 in July to -30.7 in August. The index is now at its lowest level since March 2009

*Morgan Stanley now says that the U.S. and Europe are “hovering dangerously close to a recession” and that there is a good chance we could enter one at some point in the next 6 to 12 months.

Meanwhile, millions of average American families are deeply suffering and are desperately hoping that things won’t get even worse.  Everywhere you turn, there is a tremendous amount of stress in the air.

According to the New York Times, 25 million Americans “could not find full-time jobs last month”.

As the economy crumbles, good paying full-time jobs are becoming increasingly scarce.  People are hurting and they are looking for leadership.

Well, Barack Obama is running around the country promising that he will unveil some “solutions” very shortly.

So what are those solutions going to include?  Well, the plans are still in the development stage, but the Obama administration is reportedly considering the following….

-The creation of a new government agency that will be dedicated to job creation.  This will entail more government spending and more government paper pushers, but it will probably not do much to create good paying full-time jobs.

-Pushing even more free trade agreements through Congress.  That way even more of our good jobs can be shipped to countries on the other side of the globe where paying slave wages to workers is still legal.

-A “reverse boot camp” that will train military veterans for civilian jobs.  That sounds like a good idea, but we already have millions and millions of highly trained Americans that can’t get jobs.

-An extension of the payroll tax cut for at least another year.  That will put more money into the pockets of U.S. workers, but it will also mean less revenue for the federal government.  The existing payroll tax cut has not exactly resulted in a “jobs boom”, but removing that tax cut is certainly not going to help the economy either.

-An extension of long-term unemployment benefits.  Yes, that will help the unemployed survive and will give them some money to spend into the economy, but it will not create many jobs for them.  Plus it will put the government into even more debt.

-The creation of an infrastructure bank.  Like most of the proposals above, this will entail even more government spending.  I know that a “shovel-ready” joke is called for about now, but I can’t think of one at the moment.

The ironic thing is that Barack Obama is riding around on his multistate “jobs tour” in a $1.2 million bus that was made in Canada.

You just can’t make this stuff up.

Things have gotten so bad out there that even Wal-Mart is suffering now.  Sales at Wal-Mart stores that have been open for at least a year have fallen for nine quarters in a row.

Not that anyone should have much sympathy for Wal-Mart, but it is a sign of just how bad things are getting out there.

So is there much hope for the future?  Well, considering the fact that only 32 percent of 15-year-olds in the United States are proficient in math, things don’t look good.

Our education system is a joke, tens of thousands of factories have already closed, more are closing every day, millions of jobs have been shipped overseas and most of our politicians are either incompetent or corrupt (or both).

So you would think that with all of our problems, authorities would be focused on the big issues.

But no, time after time they just keep picking on average Americans.

For example, a woman that lives in the Salem, Oregon area that is fighting terminal bone cancer tried to raise some money for her medical bills by holding a few garage sales on the weekends.

Well, the authorities in Salem got wind of this and now they are shutting her down.

Massive fraud and corruption at the big banks caused a worldwide financial crisis in 2008 and yet not a single Wall Street executive has gone to prison because of it.

Yet a cancer-stricken lady tries to hold a few yard sales to pay her bills and authorities come down on her like a ton of bricks.

Does that seem fair to you?

Our world is getting crazier every day.  The bad news is going to keep pouring in.  Global financial markets are being held together with chicken wire and duct tape.  At some point the pyramid of corruption and con games is going to come crashing down.

If you still have faith in the system, you are not very wise.  We are heading for an economic collapse that will be absolutely unprecedented, and you need to be getting prepared.