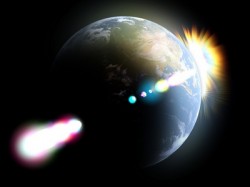 In the past, there certainly have been governments that have gotten into trouble with debt, but what we are experiencing now is the first truly global sovereign debt crisis.  There has never been a time in recorded history when virtually all of the governments of the world were drowning in debt all at the same time.  This sovereign debt crisis is never going to end until there is a major global financial collapse.  There simply is no way to unwind the colossal web of debt that we have constructed in an orderly fashion.  Right now the EU and the IMF have been making “emergency loans” to nations such as Greece, Ireland and Portugal, but that is only going to buy those countries a few additional months.  Giving more loans to nations that are already drowning in red ink may “kick the can down the road” for a little while but it isn’t going to solve anything.  Meanwhile, dozens more nations all over the globe are rapidly approaching a day of reckoning.

All of the bailouts that you are hearing about right now are simply delaying the pain.  The reality is that when the “emergency loans” for Greece stop, Greece is going to default.  Greece is toast.  The game is over for them.  You can stick a fork in Greece because it is done.

One of the big problems for Greece is that since it is part of the euro it can’t independently print more money.  If Greece cannot raise enough euros internally Greece must turn to outside assistance.

Unfortunately, at this point Greece has accumulated such a mammoth debt that it cannot possibly sustain it.  By the end of the year, it is projected that the national debt of Greece will soar to approximately 166% of GDP.

At this point very few people are interested in lending Greece more money.

As I wrote about yesterday, many of the nations around the world are only able to keep going because they are able to borrow huge amounts of money at low interest rates.

Well, nobody wants to lend money to Greece at a low rate of interest anymore.

Today, the yield on 2 year Greek bonds is back over 28 percent.

Fortunately for the rest of the world, Greece is just a very, very small part of the global economy, but when interest rates start spiking like that on U.S. debt or Japanese debt the entire world financial system will be thrown into chaos.

So why is there so much of a focus on Greece right now?

Well, there is a real danger that the panic will start to spread.

Portuguese debt is now considered to be “junk”.

But even more alarming is that Moody’s stated that what is going on in Greece played a role in reducing the credit rating of Portugal.

The following is a portion of what Moody’s had to say when they cut the credit rating of Portugal by four notches….

Although Portugal’s Ba2 rating indicates a much lower risk of
restructuring than Greece’s Caa1 rating, the EU’s evolving approach to providing official support is an important factor for Portugal because it implies a rising risk that private sector participation could become a precondition for additional rounds of official lending to Portugal in the future as well. This development is significant not only because it increases the economic risks facing current investors, but also because it may discourage new private sector lending going forward and reduce the likelihood that Portugal will soon be able to regain market access on sustainable terms.

Do you understand what is being said there?

Basically, Moody’s is saying that the terms of the Greek bailout make Portuguese debt less attractive because Portugal will likely be forced into a similar bailout at some point.

If the EU is not going to fully guarantee the debt of the member nations, then that debt becomes less attractive to investors.

The downgrade of Portugal is having all kinds of consequences.  The cost of insuring Portuguese government debt set a new record high on Wednesday, and yields on Portuguese bonds have gone haywire.

If you want to get an idea of just how badly Portuguese bonds have been crashing, just check out this chart.

But it is not just Portugal that is having problems.

Just recently, Moody’s warned that it may downgrade Italy’s Aa2 debt rating at some point within the next few months.

Spain is also on the verge of major problems and Ireland may need another bailout soon.

Unfortunately, if the dominoes start to fall the entire EU is going to go down.

Big banks all over Europe are highly exposed to sovereign debt and they are leveraged to the hilt.

It is almost as if we are looking at a replay of 2008 in many ways.

When Lehman Brothers finally collapsed, it was leveraged 31 to 1.

Anyone with half a brain can see that this is going to end badly.

So how is the European Central Bank responding to this crisis?

They are raising interest rates once again.

That certainly is not going to help the PIIGS much.

But Europe is not the only one facing a horrific debt crunch.

In Japan, the national debt is now up to about 226 percent of GDP.  So far the Japanese government has been able to handle a debt load this massive because the citizens of Japan have been willing to lend the government gigantic mountains of money at interest rates so low that they are hard to believe.

When that paradigm changes, and it will, Japan is going to be in a massive amount of trouble.  In fact, an article in Forbes has warned that even a very modest increase in interest rates would cause interest payments on Japanese government debt to exceed total government revenue by the year 2019.

Of course the biggest pile of debt sitting out there is the national debt of the United States.  The U.S. is so enslaved to debt that there is literally no way out under the current system.  To say that America is in big trouble would be a massive understatement.

In fact, the whole world is headed for trouble.

Right now government debt around the globe continues to soar at an exponential pace.  At some point a wall is going to be hit.

The Wall Street Journal recently quoted Professor Carmen Reinhart as saying the following about what we are facing….

“These processes are not linear,” warns Prof. Reinhart. “You can increase debt for a while and nothing happens. Then you hit the wall, and—bang!—what seem to be minor shocks that the markets would shrug off in other circumstances suddenly become big.”

That is the nature of debt bubbles – they keep expanding and expanding until the day that they inevitably burst.

Governments around the world will issue somewhere in the neighborhood of 5 trillion dollars more debt this year alone.  Debt to GDP ratios all over the globe continue to rise at a frightening pace.

Because the world is so interconnected today, the collapse of even one nation will devastate banks all over the planet.  If even one domino is toppled there is no telling where things may end.

The combination of huge amounts of debt and huge amounts of leverage is incredibly toxic, and that is what we have all over the globe today.  Almost every major nation is drowning in a sea of red ink and almost all of our major financial institutions are leveraged to the hilt.

There is only one way that the sovereign debt crisis can end.

I hope you are ready for what is coming.