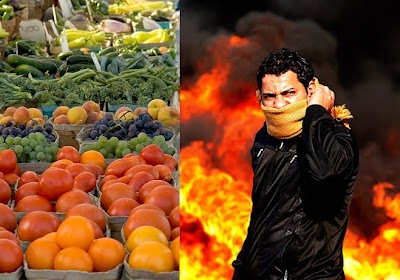 Believe it or not, growing your own food or visiting your local farmers market is more revolutionary and constructive than burning down your own city and killing security forces.

As Washington plunges the Middle East and North Africa into chaos, and city by city collapses into the hands of globalist stooges, many have mistakenly interpreted this “change” as a positive transformation.

On the contrary, the regimes that will replace the embattled nationalistic dictators in each nation the globalists despoil will interface not with the national governments in the service of their people, but will interface with the “civil society” underlay the Western backed NGOs have meticulously built up over decades. This “civil society” will in turn answer to corporate serving globalist institutions, like the IMF, WTO, World Bank and the UN, instituting crushing economic “liberalization.”

We have been given a prepackaged ideal of what “revolution” is supposed to look like. So when we see people in the streets battling security forces, waving flags, all within the backdrop of their burning society, we are satisfied that “revolution” is taking place. But the reality is, this is not a revolution by any stretch of the imagination. It is a high-tech, high-speed invasion and subjugation, a corruption of the sovereign state similar to what Tacitus described in Roman conquered Britannia.

‘His object was to accustom them to a life of peace and quiet by the provision of amenities. He therefore gave official assistance to the building of temples, public squares and good houses. He educated the sons of the chiefs in the liberal arts, and expressed a preference for British ability as compared to the trained skills of the Gauls. The result was that instead of loathing the Latin language they became eager to speak it effectively. In the same way, our national dress came into favour and the toga was everywhere to be seen. And so the population was gradually led into the demoralizing temptation of arcades, baths and sumptuous banquets. The unsuspecting Britons spoke of such novelties as ‘civilization’, when in fact they were only a feature of their enslavement.’

As we can see, “civil society” is not a new idea, nor is the concept of lulling a population into decadence and complacency while rolling them into a corrupt, exploitative domineering empire.


Real revolution will take place when people realize what indeed is really happening, who is behind it, and then no longer paying into their corrupt system. This translates into boycotting the corporate combines behind the very policies we deplore, and replacing “their” system that benefits only them, with our own system that solely benefits ourselves.

The following lists contain the corporations and institutions that constantly turn up behind the most heinous atrocities unfolding today. From the millions murdered in the misadventure in Vietnam, to the millions dying or maimed in the global “War on Terror,” and of course the the chaos unfolding during the premeditated reordering of the Middle East and North Africa that will indefinitely affect millions of lives and their future, these are the people responsible:

Some may be skeptical of whether or not boycotting and replacing the elitist system that currently domineers mankind is even possible, however it is already taking place. The alternative media is one such example, where people fed up with being lied to by obnoxious propagandists have decided to turn off the TV and report the news themselves. It has become a self-sustaining industry with exponential growth, where reputation and accuracy is replacing the slick graphics and 500 dollar suits that used to represent “legitimacy.”

The alternative media offers people accurate information. Accurate information is essential when making life decisions. Hearing the truth allows us to make decisions that benefit ourselves and our community. This stands contra to the current corporate owned media who would have us living our lives to benefit their shareholders, even to our own detriment.

We can and we must translate the success of the alternate media to all aspects of our life. The globalists have this unwarranted power because we have continuously paid into the corrupt system they have created and monopolize.

If young men became local deputies instead of joining the army, if we stopped shopping at Walmart (CFR), drinking Pepsi (CFR), eating at all the corporate owned junk-food restaurants, canceled our credit cards, canceled all but our internet connections, and basically boycotted all globalist corporations in general – along with replacing them with our own local system, where would the globalists get their manpower? Their money? Their legitimacy?

They need us, we don’t need them. That’s the big secret. We get our freedom back as soon as we take back our responsibilities for food, water, security, the monetary system, power, and manufacturing; that is independence. Independence is freedom, freedom is independence. We’ll never be free as long as we depend on the Fortune 500 for our survival.

Fixing these problems unfolding overseas starts with fixing the problems in our own backyards. Boycott the globalists, cut off their support, undermine their system, and they lose their ability to commit these atrocities. That will be a real revolution and it can start today. Not burning cities and masked rebels waving flags, but communities no longer dependent and fueling a corrupt system we all know must come to an end.