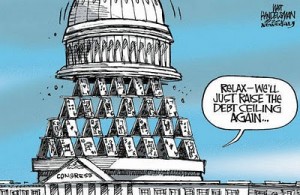 The situation in Japan is getting worse, not better. There are shortages in food, fuel and warm dry shelter. To make matters exponentially worse, nuclear power plants there continue to burn out of control and emit high levels of radiation. Japan is a stark reminder of how fast a modern technologically advanced society can be brought to its knees by an unforeseen calamity.

On the other side of the Pacific, the devastating pictures from that island nation are taking the attention away from our own, much more predictable, calamity coming from a tsunami of debt. As the U.S. and other world governments continue to print money to keep the banks and system solvent, a ball of debt is growing. It is on course to swamp the system.

In his latest report, Martin Armstrong, former Chairman of Princeton Economics and an expert in the study of economic cycles, said events happening in places like Japan or the Middle East are not the main issue the world is facing.  Armstrong was just released from prison after an 11 year stay.  He pled  guilty to a conspiracy in 2000, but spent most of his time in jail for contempt of court.   Armstrong’s tail is a highly unusual criminal and civil case involving a very brilliant econimic scholar. (Click here to read more on this story from Bloomberg.) Armstrong has written many articles from prison.  His latest comments were the last from his incarceration.   Armstrong said, “This is coming at a time when governments are broke. We have state and local governments in a debt crisis and that meltdown is very real!!!!!!! Government is collapsing. That is the issue.” Armstrong says because of all the money created to bail out failing banks, gold is gaining in price. “This is not just inflation. We are on the verge of a currency meltdown this time,” said Armstrong. (Click here to read the latest report from Martin Armstrong.)

The latest analysis from economist John Williams of Shadowstats.com agrees with Armstrong. In a special report released yesterday, Williams warns a “great collapse nears.” Williams said the collapse will take the form of “a hyperinflationary great depression. Such will encompass a complete collapse in the purchasing power of the U.S. dollar; a collapse in the normal stream of U.S. commercial and economic activity; a collapse in the U.S. financial system as we know it. . .” The hyperinflation will come from bank bailouts and ongoing Quantitative Easing (QE or money printing) used to keep the financial system from collapse. Calamities in places like Japan will likely accelerate QE. The Fed will have to make up for the loss of Japan as a buyer of our debt. Williams said,“. . . the economic and systemic-solvency crises appear to be worsening, not improving, suggesting more, not less, quantitative easing.” This, in turn, will quicken the loss of buying power for the buck. So, we have a vicious cycle of QE coupled with declining tax revenue that is accelerating the “great collapse” scenario.

The big question is when? Williams says, “Outside timing on the hyperinflation remains 2014, but there is strong risk of the currency catastrophe beginning to unfold in the months ahead. It may be starting to unfold as we go to press. . .” Meaning, the process of hyperinflation may have already started. Recent inflation numbers and spiking gas prices talked about on this site and many others seem to confirm Williams’ analysis.

If the financial system and government are headed for a shutdown, what should the average person do? Here is what John Williams said, “With no viable or politically-practical way of balancing U.S. fiscal conditions and avoiding this financial economic Armageddon, the best that individuals can do at this point is to protect themselves, both as to meeting short-range survival needs as well as to preserving current wealth and assets over the longer term. Efforts there, respectively, would encompass building a store of key consumables, such as food and water, and moving assets into physical precious metals and outside of the U.S. dollar.”

There is no way of telling how this financial crisis will unfold, or what extremes will be reached. It can be anything from an ongoing deep recession to a complete “Mad Max” style breakdown. If Williams and Armstrong are only half right, then we will experience something in between. At the very least, tough times are coming and they are going to be with us for a while.